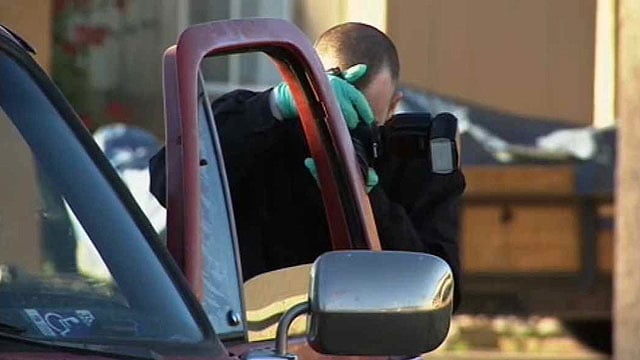 Police continue the investigation, which includes taking pictures of the suspect’s truck that was found parked outside the home. (Photo credit: CBS)

An early morning home invasion Friday ended with the suspect being fatally shot and the 77-year-old Phoenix homeowner devastated over having to take his life but frustrated with the recent rash of break-ins.

A local ABC affiliate reported that the homeowner, Russell Wildey, returned home from a dinner date Thursday evening to find that his home had been broken into and ransacked.

“I mean every drawer was pulled out and dumped,” Wildey told reporters.

However, with three to four break-ins since Christmas, the tired homeowner just went to bed without even bothering to call the police, but around 3 a.m. Wildey was awakened to strange noises in his home. At that point he realized he was once again the victim of yet another break-in.

Wildey grabbed his shotgun and walked towards the front of his home where he came face to face with an intruder, later identified as 30-year-old William Thomas Mackey. Wildey fired one fatal shot at Mackey, who collapsed on the tile by the front door.

Mackey was pronounced dead at the scene when police arrived.

Wildey had hoped that he would never have to use his shotgun in self-defense and is heartbroken over taking the young man’s life.

“The guy was probably the same age as my son, and no parent wants to hear about something like this happening,” he said.

Wildey, so frustrated with the recent increase in crime, no longer even wants to live in the place where he’s called home for the last 25 years.

“Just take the whole damn house, I don’t care. It’s not worth it,” Wildey said with a quivering voice.

And Wildey isn’t the only one who has noticed the rising crime rate in the area either. Sandi Corbin told reporters that she’s lived in the neighborhood just as long as Wildey and noticed the dramatic increase as well.

“My house has been robbed six times,” she said. “I’ve been in the neighborhood 27 years. It was such a nice quiet family neighborhood to move into. Now, in the last 10 years, it has changed a lot.”

Jeff, who did not wish to share his last name, is another nearby neighbor frustrated at the growing crime. He was alerted to the home invasion when his dog started barking viciously following the sound of the shotgun blast. He told reporters that the condition of the economy has had an effect on the increasing number of break-ins.

Other neighborhood residents stand behind Wildey’s decision to use deadly force.

“My family comes first,” said Jeffrey Gabriel, who lives a few doors down from Wildey. “I mean you break into my house, you’re up to no good to start with. If I shoot you and kill you, I might feel bad because you have a family, but you were threatening mine.”

Wildey, who lives alone, was not injured during the incident. Police did not indicate that Mackey was armed, but they do not expect any charges to be filed against the homeowner, who appears to be protected under the state’s castle doctrine laws.

Authorities are unsure if Mackey was responsible for any of the previous burglaries at either Wildey’s or other homes in the neighborhood.