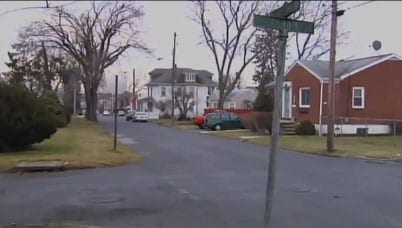 Neighbors say that, other than the occasional booming of loud music or drunken outbursts from patrons at nearby bars, the area is normally very quiet. (Photo credit: The Morning Call)

A would-be victim fought back against three armed and much younger assailants when the trio attempted to rob him outside of his Allentown, Pennsylvania, home last Wednesday night, local media reported.

According to several witnesses and the victim, whose identity has remained private, he had just returned home about 10:40 p.m. and as he was getting out of his car he was jumped by three young men wearing hoodies.

Witnesses say it appeared that the suspects were in their teens, but later discovered that they were much older.

The young men began assaulting the victim, who is in his 50s, and pistol whipping him as they attempted to rob him, but when the man pulled out his own gun one of the suspects began firing at him. The victim was not struck but returned fire, hitting one of the suspects as the other two ran away leaving their injured accomplice behind.

“I heard the pop, pop, pop, pop, pop. They were shooting at each other,” neighbor Thomas Hoffman, who witnessed the entire incident unfold from inside his home, told reporters.

“I went outside and I didn’t see anyone else but my neighbor. His left eye was all puffed up. He said, ‘Call the cops. I just shot somebody,’” Hoffman recalled.

He could see the suspect lying in a pool of blood on the driveway next door.

“Once one car came, there were about 30 of them,” Hoffman said. “An officer walked over to the body. She had gloves on. She felt for his pulse and then she walked away.”

The suspect, who was later identified as 35-year-old Carlos N. Lugo Jr., was pronounced dead on the scene.

Apparently Lugo had been shot back in 1994 while he was sitting in the back seat of a cab, an incident which allegedly resulted over a disagreement about drug transactions and money that was owed.

Then in 1996 Lugo, who was only 18-years-old at the time, was charged with homicide for his part in the death of an Allentown reserve deputy stemming from an argument over a game of hacky sack.

Apparently Lugo and two friends attacked the man delivering what would later prove to be fatal blows to the head. The man died several days after the incident from swelling in the brain caused by fractures in his skull.

The charges were dropped when it could not be determined who delivered the fatal blows, but Lugo still plead guilty to aggravated assault and conspiracy and was sentenced to two to eight years in prison.

Again in 2006 he faced a sentence of four to 12 years when it was discovered that he was the ringleader in drug ring run from within the Lehigh County Prison. Lugo once again plead guilty to violating the state’s corrupt organizations law, admitting that he was enticed by the drug dealers who brought him things and gave him money.

The prosecutor in the drug ring case felt that had Lugo not chosen the path that he did and used his intelligence and business skills in a more positive manner, he likely would have been very successful.

The remaining two suspects are still at large.

The victim was briefly detained while officers figured out the details of what had happened.

The man was then taken to a local hospital where he received treatment for his injuries and was released. His son-in-law, Abi Torres, believes that his father-in-law’s heart condition was also aggravated by the attempted robbery.

Torres revealed that the man has a concealed carry permit, although that was not confirmed by the police, nor did they indicate whether they believed the shooting was justified. In fact, officers didn’t comment on the incident at all.

Several neighbors heard the gunfire erupt in the normally quiet neighborhood, but most support the man’s actions, saying that he was lucky to be armed.