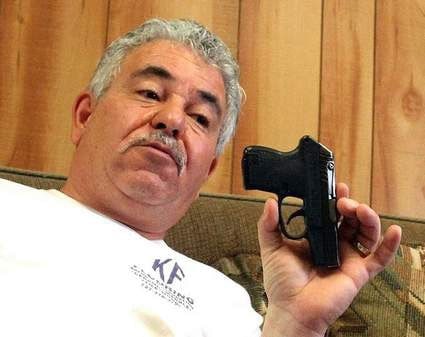 John Filippidis shows off the Kel-Tec .380 he normally carries. “Things aren’t like they used to be. The break-ins, the burglaries, all the crime… I wanted to be able to defend my family, my household and the ground I’m standing on. But I’m not looking for any trouble,” he said. (Photo credit: The Tampa Tribune)

A Florida father of three is rethinking his decision to have a concealed carry license after he and his family were detained during a traffic stop in Maryland and questioned for nearly an hour over a gun that the man clearly told the officer he had left at home locked away in his safe.

John Filippidis, along with his wife, Kally, and three daughters, 17-year-old twins Nasia and Yianni and 13-year-old Gina, were taking a family road trip last month from their Florida home up to Woodridge, New Jersey, for Christmas and a family wedding, John shared with The Tampa Tribune in an interview.

Although John has a valid concealed carry license and knew the different laws within the states that he would be traveling, he decided to leave the Kel-Tec .380 he normally carries at home, locked up in his safe.

“I know the laws and I know the rules,” he told the newspaper. “But I just think it’s a better idea to leave it home.”

After all, the father of three wasn’t looking for any trouble, he was just on his way to spend some time with family during the holidays.

John claims the trouble all started when they drove into Maryland, which of course, isn’t known to be the most gun-friendly state in the country.

They had just drove the family’s 2012 Ford Expedition through the Fort McHenry Tunnel into Maryland when they noticed the patrol car, which at first paced them, then pulled ahead of them and again got behind them.

“Ten minutes he’s behind us,” John explained. “We weren’t speeding. In fact, lots of other cars were whizzing past.”

“You know you have a police car behind you, you don’t speed, right?” Kally added.

“We keep wondering, is he going to do something?” John said.

Finally, the lights start flashing and John – somewhat anxious to get this ordeal, whatever it’s about, out of the way – pulls over. An officer from the Maryland Transportation Authority Police (MTAP) walked up to the family’s vehicle, requested John’s license and registration, then returned to his patrol car.

“At home in my safe,” John replied.

“Don’t move,” the officer instructed him, and returned to the passenger side of the family’s vehicle.

“Your husband owns a gun,” the officer said to Kally. “Where is it?”

“I don’t know,” she told the officer.

While retelling the story to reporters, Kally admitted, “That’s all I should have said.”

However, trying to be both helpful and cooperative, she told the officer, “Maybe in the glove [box]. Maybe in the console. I’m scared of it. I don’t want to have anything to do with it. I might shoot right through my foot.”

At that point the officer returned to John with shocking allegations.

“You’re a liar. You’re lying to me. Your family says you have it,” the officer insisted. “Where is the gun? Tell me where it is and we can resolve this right now.”

The officer called for backup. Three additional units arrived and they spent the next hour searching through the family’s SUV once the family was patted down and separated into different patrol cars.

“All that time, he’s humiliating me in front of my family, making me feel like a criminal,” John said. “I’ve never been to prison, never declared bankruptcy, I pay my taxes, support my 20 employees’ families; I’ve never been in any kind of trouble.”

After what “felt like forever,” the officer finally wrote John a warning for speeding and sent the family on their way.

No gun was ever found because, as John had stated when the officer first asked, it was locked up in a safe inside their home in Florida.

At the time, John was unsure how the officer knew that he owned a gun or even had a concealed carry license, and MTAP wasn’t offering any information surrounding the incident.

Three days after The Tampa Tribune first published the article telling the Filippidis’ story, the Maryland Transportation Authority Police posted the following statement on their Facebook page, where it did not generate many positive responses.

In response to a recent complaint about the Maryland Transportation Authority (MDTA) Police and a Jan. 12, 2014, Tampa Tribune article, a preliminary review indicates that all proper protocols were followed throughout the Dec. 30, 2013, 55-minute traffic stop on I-95, which was initiated for a speeding violation. The MDTA takes these allegations seriously and will continue to investigate this personnel matter.

The same day that MTAP posted the statement on their Facebook page, the political website The Conservative Treehouse filed a public records request with the agency in an attempt to find out what exactly happened during the traffic stop and – perhaps more importantly – how the officer even knew that John owned a gun.

According to the website, the state of Maryland has a type of technical security database, the Maryland Coordination and Analysis Center, which allows access to the databases of other states. Some states willingly share information from their own databases and for those who don’t, the information is gathered through law enforcement systems.

The center contains a wealth of identification systems, including a complete list of concealed carry license holders in the state of Florida, as well as the license plates numbers of those who are on that list, all which can be cross-referenced within the system.

Apparently the Filippidis’ license plate number may have generated an alert when the family passed through the Fort McHenry Tunnel and that’s how the officer knew that John was a concealed carry license holder and a gun owner.

John did receive apologies from the officer’s captain and the Maryland Transportation Authority Police internal affairs captain, but the entire incident has left him contemplating whether or not to just give up his concealed carry license altogether, and asking one important question,

“In America, how does such a thing happen?”