SIG Sauer had many, many new products at SHOT Show this year. As is commonly SIG, most of these new products were existing guns in new versions, with cosmetic and materials changes that make them stand out from their parent products but are, in a sense, not new guns at all.

The P320, however, is completely new, and a major change in direction for SIG. A first for the storied gun manufacturer, the SIG P320 is striker-fired. Following in the footsteps of the P250, the P320 is a modular pistol; it has a serialized sub-frame — what SIG calls the Fire Control Unit, or FCU — that for legal purposes is the firearm. 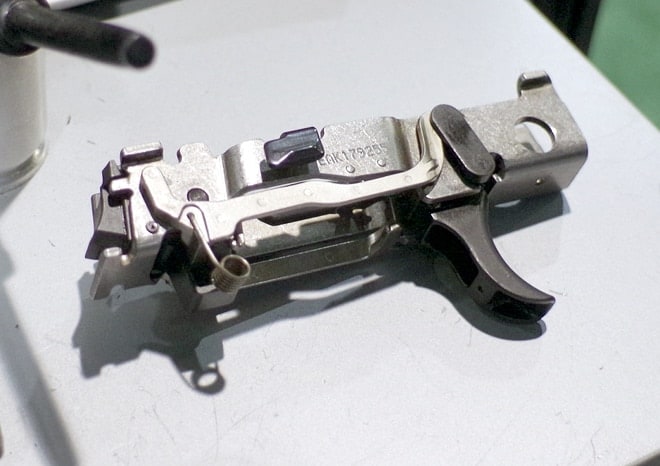 What this means is that it is possible to have one sub-frame and several different sets of grips, slides, barrels and magazines to change the caliber, capacity and size of the gun. While SIG currently only lists two sizes, full-size and carry, and three calibers, 9mm, .40 S&W and .357 SIG, if it takes after the P250 we’ll be sure to see a sub-compact kit and .45 ACP and possibly even .380 ACP models.

The interchangeable grips will be available in different sizes, small, medium and large to tailor the grips to individual shooters. Unlike interchangeable backstraps or grip panels the whole polymer grip is swapped out, from dust cover to beavertail. The grips are one-piece units with a mild texture and a full-length rail.

While SIG is kicking the P320 off with just two models, they will have a lot of options on the table for end users. They’re clearly targeting the law enforcement market and some of these features will serve them well.

The modular nature of the P320 makes it easy for SIG to provide optional safeties for some users while keeping things simple for others. Users will be able to decide if they want their P320 to have an ambidextrous manual thumb safety, passive trigger safety, magazine disconnect safety and loaded chamber indicator, in any combination or with none of the above.

On top of all that the P320 has a fine, fine trigger. It is light with a very short take-up, crisp break and fast, positive reset. It’s one of the nicer striker-fired triggers out there and it will no doubt be compared to some of the best, as good as or better than the XD-M, PPQ and FNS, if the P320s we handled at SHOT are at all representative of the guns that will hit the market.

Additionally the gun is very lefty-friendly, with an ambidextrous slide stop and a reversible magazine release, unlike your traditional SIG pistols.

It’s easy to say there are no other service pistols like it. The only way this gun won’t be popular is if something goes wrong — the P250 stumbled getting out of the gate, requiring a re-design early in its life and it was also particularly expensive for what it was at first — but SIG is launching this pistol with a breed of confidence that’s exciting even to us, and with an MSRP of $713, real-world prices hopefully around $600 or less, it’s a lot more accessible than the majority of SIG pistols. 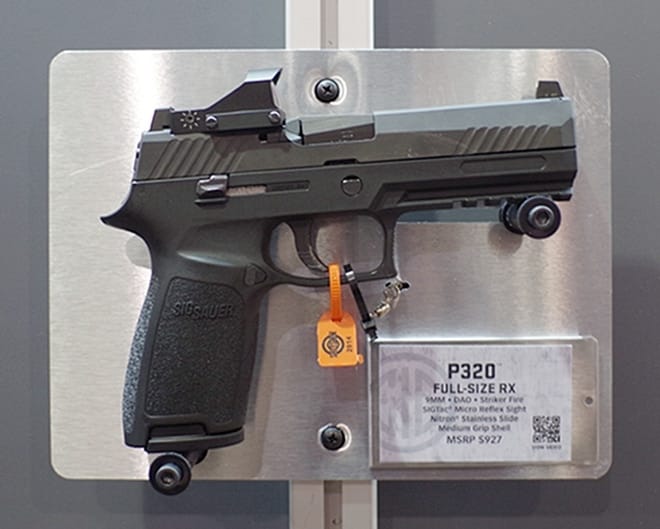 And while it is an all-new pistol some parts are already available, as the P320 uses P250 magazines and P226 sights, although the guns will come with factory-equipped tritium night sights. A SIG rep told us the grip frames, barrels and recoil assemblies are the same as those used for the P250. SIG also had a model with a SIGTac red dot sight and raised night sights to cowitness.

This is a very cool pistol and we look forward to spending more time with it in person at the range. It’s going to take a bite out of the striker-fired market and no doubt make converts out of people tied to other pistols.

For more videos like the one at the top head over to the Guns America YouTube channel.