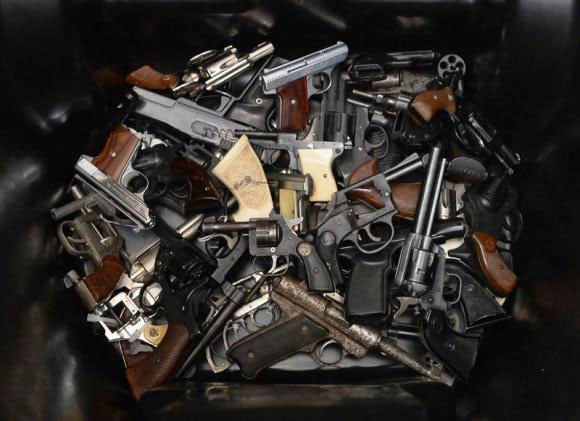 A review published in the Annals of Internal Medicine this week revealed that, according to a review of previous studies, access to firearms increases a person’s chance of becoming either a victim of homicide or suicide. Although the presence of a gun increases the chance of one becoming the victim of a homicide, researches still don’t understand why that’s the case — that is because the victim’s gun is rarely the one that’s used to kill him/her.”

“There have been a lot of conflicting reports about having a firearm in the home,” said Andrew Anglemyer, the study’s lead author.

Anglemyer and colleagues at the University of California-San Francisco reviewed the data from 14 different studies published between 1988 and 2005, with some of those studies focusing specifically on firearm-related deaths and others being ecological studies of different populations.

Apparently all but one of the studies concluded that greater access to guns equates to a greater chance of dying by either homicide or suicide, the same conclusion that Anglemeyer’s research revealed.

Furthermore, the rate of female homicide victims, most at the hands of someone they know, is significantly higher when a gun is introduced into the environment, indicating an accurate – and predictable — pattern of the escalation of violence in domestic violence situations.

“Most analyses will find some conflicting studies,” Anglemyer told Reuters Health. “That’s not at all what we see here.”

Suicide remains the tenth leading cause of death in the U.S., taking the lives of 12 out of every 100,000 people each year. Firearms are used in more than half of successful suicides in the country.

However, the homicide rate is less than half the suicide rate, claiming the lives of five in every 100,000 people each year, and according to data from 2009, firearms are used in approximately 66 percent of those homicides.

“The lethality of the weapons drives the increased risk of suicide and homicide completion,” Dr. Brian Smith and Rose Cheney from the University of Pennsylvania Health System in Philadelphia wrote in an email to Reuters. “Firearms have very high case fatality rates, particularly in the case of suicide. Guns leave very little room for reconsideration of the choice to end a life.”

However, as noted in the review, the conclusion that more firearms equals more deaths isn’t exactly accurate, as there are potential flaws in that theory, starting with the fact that the “conclusions are only as good as the data and studies that we identified,” and that data can differ significantly from study to study. For example, the rate of firearms used in homicides is not consistent throughout each study, differing more than 25 percent between studies reviewed.

In other words, if the reviews start with botched data from prior studies, the end analysis will result in a botched conclusion as well.

However, in an effort to avoid a biased outcome, rather than attempting to compare death rates in homes with firearms compared to homes without – which in actuality cannot accurately be done since the exact number of homes with firearms is not known – researchers started with the victim then worked their way backwards to determine whether or not that victim had access to a firearm.

Pamela Blaies and her son, Jonathan, sit behind a picture of Amanda Blaies-Rinaldi. In 2011, Amanda was shot five times by her husband. Signs of domestic violence and the threat of death were there beforehand. (Photo credit: USA Today)

The misclassification of access to firearms and causes of death are another area that can inadvertently affect statistical outcomes of such studies.

“Causes of firearm-related deaths are inconsistently reported as homicide or accidental, particularly among children. In fact, in some cases, accidental firearm-related deaths among children may be classified as homicide due to an unsecured firearm or as a result of a medical examiner’s decision that any death resulting from one person shooting another, regardless of intent, is a homicide,” the review points out.

Additionally, there are other factors to consider when it comes to an increased risk of homicide or suicide, as the presence of a gun isn’t the only determining factor.

In the case of suicides, the mere presence of a firearm in the home does not create suicidal ideation, one study reviewed concluded. However, for those with suicidal thoughts and tendencies, it’s more likely that a firearm, when available, will be used to carry out suicidal plans. The study concluded that those with “firearm access were no more likely to have suicidal thoughts or a suicide plan in the past 12 months than those without firearm access.”

In addition, it’s not always the gun itself that increases the potential for violence with a fatal outcome.

“Whether the presence of a firearm among case patients is the result of environmental characteristics or living conditions is unclear,” the review points out. “For example, some persons may purchase a firearm for protection because of neighborhood crime, which then translates the risk from the ownership of a firearm to the neighborhood.”

“Future studies of firearm access and homicide risk should focus on the role that social factors and surrounding living conditions play in homicide victimization,” the review concluded.