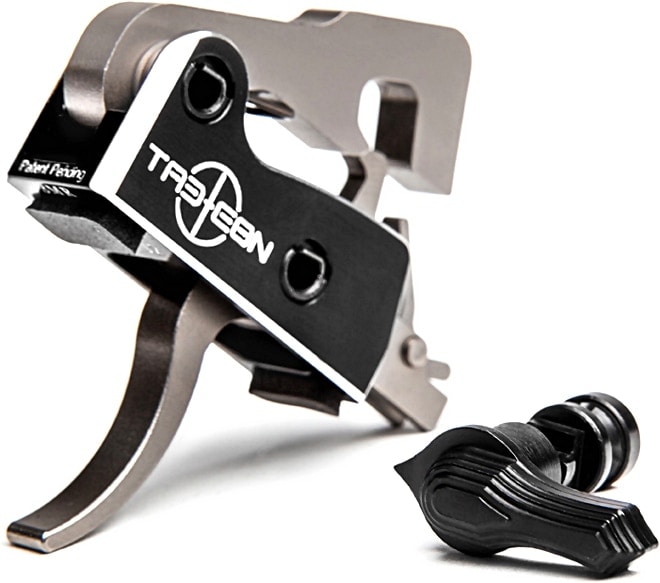 The Tac-Con 3MR is a new type of fire control group that uses some of the energy from a cycling bolt to partially-reset the trigger. It promises very fast, controllable rapid-fire shooting. People are calling it the “faux auto” trigger.

It’s not NFA-regulated and it comes with the ATF’s blessing. At $495, it’s expensive, but still a fraction of what a registered, transferable M16 or full-auto AR-15 costs. This looks like the shoot-fast solution people have been waiting for.

Unlike bump-fire stocks which add bulk and for some, comprimise functionality and flexibility, the 3MR simply takes the place of an AR-15’s fire control group and leaves the stock selection up to the user.
And as a bonus, to engage the Tac-Con’s “3rd Mode” you flip the safety all the way around to the full-auto selector position. That part is very satisfying.

In practice … it takes practice. Here is video we shot using the Tac-Con 3MR trigger at SHOT Show last week.

With the second mag I got better. It would take a lot of ammo to really get the hang of it. Asking around, other people had similar problems, although some people were naturals.

There are two different ways to use the 3MR to increase your firing rate. The easiest way is the hold the rifle lightly, not tucked into your shoulder and to slightly pull forward with your support hand, like with a bump-fire stock.

This isn’t really conducive to solid, accurate shooting, but it works and it doesn’t take a lot of practice to get into sending lead downrange in a hurry.

The other way is to hold it strong and try to “feather” the trigger. If your splits are fast this will make them faster. But make no mistake, the trigger doesn’t fully reset by itself. You have to release and pull the trigger for each shot.

I was in the group that didn’t take to it right away. At first I didn’t even think it was in 3rd mode and I couldn’t tell if it was me or the rifle that was shooting fast. I got better with it after some effort and I’m sure that with enough ammo I could get the thing flying.

Part of that is because it’s just a good trigger anyway. It’s light and easy to manipulate with a practical 4.5-pound pull and no real pre-travel and limited over-travel.

While it seems likely that the trigger can improve your splits, you have to decide if it’s worth it to you to have a $500 trigger or $500 in ammo to practice fast shooting with.

The 3MR strikes me as something for the gun owner who already has everything. Tons of ammo to shoot and money to spare. Some people have already writen off the 3MR as a gimick, a way to cheat a little and speed up your splits.

Depending on the user, that might be the case.

It bears mentioning again, $500 buys a good amount of ammo to practice with, or a competition trigger and some money left over for training.

Still, it kinda works, and with a little practice, it can be used for rapid fire. It won’t be as effortless as true full-auto, but it won’t take as much effort to master as shooting a traditional trigger fast.

And there is a market for it, if only because it flips all the way ’round.