Homeowner’s son fatally shoots burglary suspect; ‘I wasn’t going to have my dad die in front of me’ (VIDEO) 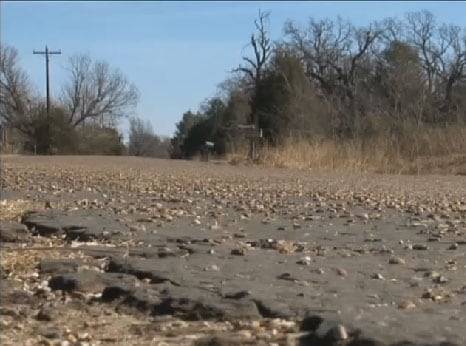 An oil stain remains on the pavement where the suspect’s truck was parked, as well as a bloodstain where he met his demise. (Photo credit: KLTV)

A burglary suspect is dead after an early morning confrontation with a homeowner and his son at their Van Zandt County, Texas, residence Tuesday.

The homeowner, who did not wish to share his name, told reporters that he was sitting in a recliner in his house when he heard the suspect’s truck drive down the rural road around 4 a.m. When he looked outside, he saw the suspect rummaging through the homeowner’s truck in front of his house.

The sound of gunfire awakened the homeowner’s son who had been asleep inside the house.

The homeowner then noticed what he believed to be the suspect’s truck parked in the dark, with a flatbed trailer attached and the engine of the truck still running. He walked over to the truck, turned it off and took the keys out of the ignition, in an attempt to keep the suspect from fleeing the area before officers could arrive.

But then the suspect suddenly appeared from the darkness and the two became engaged in a physical altercation, landing in a nearby ditch. The suspect was able to take the homeowner’s gun and turned it on him, leaving the homeowner at the receiving end of his own rifle, knowing that the gun still had two rounds left in it.

Then the homeowner’s son stepped in.

“All I saw was this guy coming up out of the ditch with a gun, and he put that gun on my dad,” the homeowner’s son recalled.

And that’s when the son fired a single shot from about 40 yards away and struck the suspect.

The suspect was pronounced dead at the scene.

It is unknown if the suspect was attempting to take items from the truck or actually trying to steal the vehicle.

The case has been turned over to the District Attorney’s office, and authorities did not indicate that they expected any charges to be filed against the homeowner or his son.

“We are a nation of laws. Our law protects the law abiding citizens of our nation. It is unfortunate that a young man had to die this morning in our community because of a bad decision he made to violate the rights of a law abiding citizen,” Van Zandt County Sheriff Michael Lindsey Ray stated.

“This Sheriff’s Office will always support the law abiding citizens of this community when they are proactively protecting their lives, liberty, and property, especially during a lawful use of force situation,” the sheriff continued.