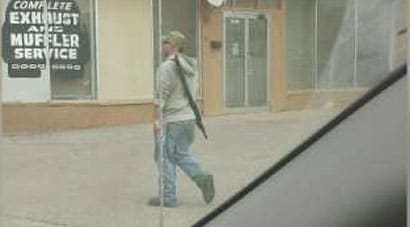 Apparently this was the image that caused alarm in the small town, prompting a flood of 911 calls and a lockdown of a middle school. (Photo credit: News West 9)

What started as a Wednesday afternoon walk ended with one man being arrested and a middle school in Andrews, Texas going on lockdown after police received a flood of phone calls about a man carrying a rifle. But a local gun rights group says the man did nothing wrong and the arrest was unlawful.

Michael Keoughan, a 27-year-old U.S. Army veteran, was walking through the small town around lunch time with a rifle strapped across his back when the disturbance started, local media reports.

“I was driving down Main Street to go get lunch and I saw a man with a rifle on his back,” explained Angela Arthur, who snapped a picture of the man and called 911 along with several other people. “I was gonna stop at Allsups but then I thought he maybe was gonna go in there so I changed my mind and just went somewhere else because it’s scary.”

A short time later, a nearby middle school was placed on lockdown as Keoughan was surrounded by the police, eventually being arrested for disorderly conduct and displaying a weapon in a manner calculated to cause alarm.

Keoughan, along with others, believe his arrest was unlawful, as in the state of Texas it is legal to openly carry long arms provided they are displayed in a non-threatening and non-alarming manner.

Even Arthur, who called 911, admitted that Keoughan wasn’t acting in a threatening manner.

“He was just calmly walking,” she said. “You wouldn’t think anything of it unless he didn’t have a gun.”

And according to Keoughan he “had great interactions throughout the entire day until the police showed up.”

Stephanie McDonald, a member of Midland chapter of the gun rights group “Come and Take It” also believes Keoughan’s arrest was unlawful.

“That’s not really a valid charge when he was just walking down the street with his rifle across his back,” she said. “It wasn’t across his front, he wasn’t carrying it in his hands, he wasn’t brandishing it. It was simply strung across his back.”

Keoughan was actually out that afternoon searching for a suitable route for a weekend rally hosted by the group, whose primary goal is to educate and inform the public about the legalities of open carry.

Part of the reason Keoughan’s arrest came as such a shock to the group was that they believed they had “assurances” from Police Chief Bud Jones that something like this would not occur again. However, Jones believed that their “assurances” were more of a miscommunication.

“If an individual on his own wants to do that, he, out of the common courtesy, should contact us. That’s what I told them,” Jones said, adding, “We didn’t know who he was, had no clue, but we started getting a mass number of phone calls, by displaying the weapon, he caused undue alarm.”

Jones, who said the gun rights group has his full support, stated that his main concern is for the protection of the people in the community.

“This is the issue that they don’t want to address that we have to address,” Jones said. “When we get a call about a person with a gun, do we ignore it? Walking down the street? They’re alluding to the fact that we don’t have any right to make contact to them because they’re not doing anything wrong. I beg to differ with them.”

“He didn’t tell anybody, they say they don’t have to, and yeah they probably don’t, but when they disrupt the community like they did, something has to happen,” Jones later told a local CBS affiliate.

However, Keoughan doesn’t argue with law enforcement’s right to investigate the situation, what he doesn’t agree with is the fact that he was still arrested and charged with what he feels are false accusations.

“Just because someone calls in and says they’re alarmed doesn’t mean there’s an actual threat in the carrying,” McDonald agreed. “It can be alarming to some, I understand that but that’s part of why we’re here. To educate the public and get the word out that we’re not the enemy. We’re fighting for your rights.”

Keoughan was the second member of “Come and Take It” to be arrested in Andrews after openly carrying a long arm, in addition to several others recently arrested across Texas for the same offense.

Three men were arrested in September for disorderly conduct after they sat outside a San Antonio Starbucks sipping on iced coffees and “enjoying their Second Amendment rights.”

The arrest of Army Master Sgt. C.J. Grisham in April sparked outrage among gun rights advocates and prompted a “Come and Take It” rally in Temple, Texas. Grisham was on a hike, helping his teenage son to earn a Boy Scouts merit badge, when he was arrested  for “rudely displaying” his AR-15 while walking down the rural road.

Regardless of the group’s recent run-in with local law enforcement, they still intend to move forward with their plans for the weekend rally, which has already been approved by Jones.