George Zimmerman’s new painting of the Florida prosecutor who charged him in the Trayvon Martin trial was unveiled via Twitter Wednesday.

After his acquittal of the death of Martin in 2012, Zimmerman has taken to creating artwork. In December of last year, Zimmerman sold his first original painting for over $100,000. Now, he’s is at it again. His brother, Robert Zimmerman, tweeted a photo of the new painting.

Zimmerman’s painting is of Special Prosecutor Angela Corey, who previously charged him with second-degree murder. The phrase “I have this much respect for the American judicial system” are in all caps at the top of the canvas. 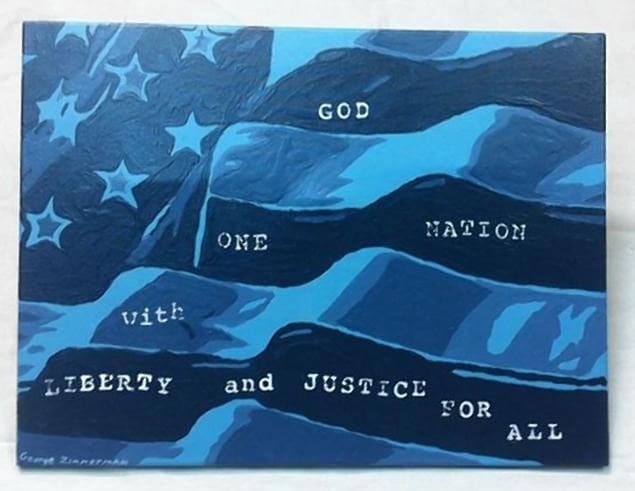 Zimmerman’s previous painting was of a blue, waving American flag with the words “God One Nation with Liberty and Justice For all,” scattered across the canvas. It auctioned on eBay for $100,099.99.

“Everyone has been asking what I have been doing with myself,” Zimmerman said last December about his American flag painting. “I found a creative, way to express myself, my emotions and the symbols that represent my experiences. My art work allows me to reflect, providing a therapeutic outlet and allows me to remain indoors ☺ I hope you enjoy owning this piece as much as I enjoyed creating it. Your friend, George Zimmerman.”