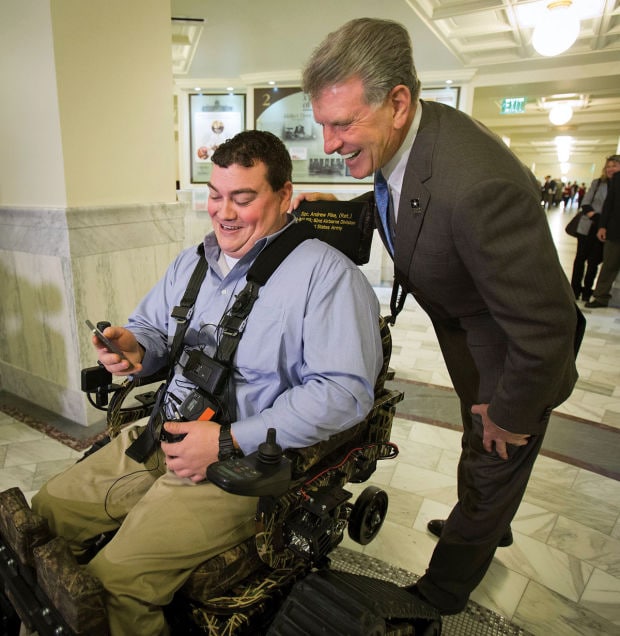 Iraq war veteran and Purple Heart recipient Andrew Pike got quite a surprise when he went to the Idaho Capitol on Wednesday during what he thought was a simple tour of the statehouse.

Pike, who is paralyzed from the waist down after he was shot in the back by an enemy sniper in 2007, received a new set of wheels.

Though, the wheel chair that was presented to him by Gov. C.L. “Butch” Otter is not just an ordinary wheel chair — it’s an all-terrain machine with a rubberized track system, hand-held controls, flashlight, camouflage seating and gun rack, as local news affiliate KVTB reported.

The chair will allow the avid sportsman, who never gave up his love for the outdoors despite his debilitating injury, to move about more independently when hunting and fishing, specifically because there are controls that allow the user to stand while operating the machine.

“I’ve been able to hunt and fish off and on,” Pike told Magic Valley.com. “This will be my first chance to move around by myself.”

The man behind the gift was Bill Potter, the chairman of Higher Ground, a nonprofit organization that works with veterans and individuals with disabilities to improve their quality of life through inclusive therapeutic, recreational and educational activities.

“This whole thing started two years ago when Andrew and I went fishing one afternoon in Hagerman,” Potter said. “I told Andrew, ‘If you make one small move, you might fall in and I’m 70 years old, I’m not going to be able to get you out.'”

Potter then set about procuring the donations for the chair, noting that the friendly folks in Idaho would be down for the challenge.

“… I said, ‘What the heck, we’re from Idaho! We can do this!’ So we did,” Potter told the people who attended the event.

Pike, 28, was not only grateful for the new wheels, but also inspired by the gesture.

“The only thing you can do is look to what’s in the future, look to what you can do, and take those things and build on them, and if somebody says you can’t, then find a way to do it,” Pike told KTVB.

He also told reporters that he will get plenty of use out of the gun rack. Pike currently works as the Western Regional Salesman for the Boise-based gun manufacturer Primary Weapons Systems.