Actor Dan Aykroyd was sworn in as a reserve sheriff’s deputy at the Hinds County Sheriff’s Department in Mississippi Friday.

Aykroyd, famed for his roles in the movies “Ghostbusters” and “Blues Brothers,” is a long time public servant and has spent nearly 16 years as a police officer across two different Louisiana law enforcement agencies. His letter of request to join the Hinds County reserve unit was honored and Sheriff Tyrone Lewis swore the actor in, Clarion Ledger reports. 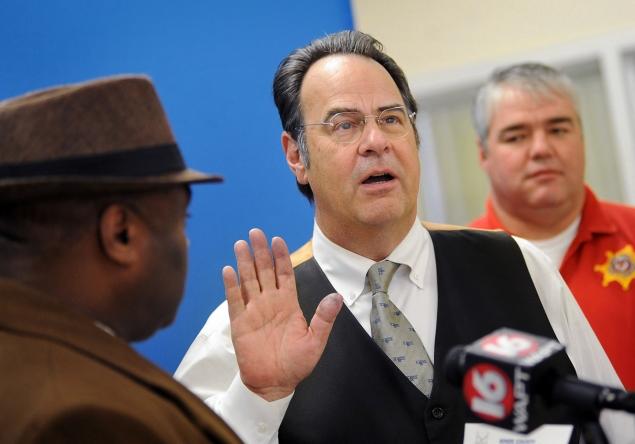 Akroyd gets sworn in as a reserve deputy at the Hinds County Sheriff’s Department.

Aykroyd took a break from filming “Get On Up” at a nearby set to attend the ceremony, and was excited to join the ranks of the Hinds County Sheriff’s Department.

“It’s an honor to join these ranks today. I understand the challenges that law enforcement face in today’s world. … It’s a great honor, and I hope I can uphold my duties professionally and with integrity and honesty, and I hope to do that.”

Evidently, a ghost has plagued a local courthouse for some time, and Aykroyd may be just the cop to bust it. While the actor turned police officer enjoys his old movie roles, he hopes to use his influence to raise funds for the department.

“A lot of departments can’t even afford ammunition for practice; it’s that kind of tiny little challenge that you never think of,” he said. “We’re going to be aware of that and aware of maybe doing some programs and some fundraisers to supplement the resources of the department here.”

Maybe Aykroyd will revamp all the patrol cars while he’s there too.