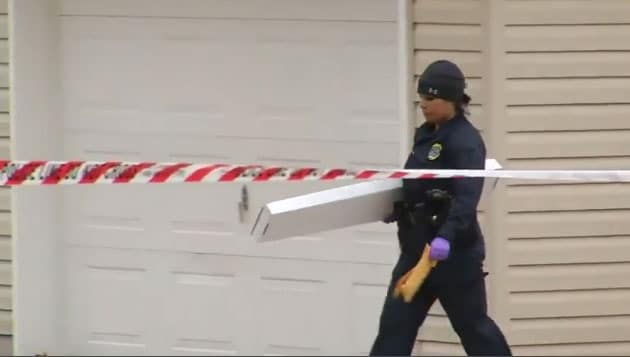 Apparently the homeowner was under a court order not to possess firearms, and it appears that police removed at least one from his home. (Photo credit: News 4 Jax)

A Saturday morning home invasion in Jacksonville, Florida, ended with the suspect dead and the homeowner behind bars, but not because he shot the intruder.

According to reports by local media, the suspect, an unidentified 20-year-old black male, broke into the home around 10 a.m. after smashing the glass on a side window. But once he made his way into the house, the armed homeowner opened fire on him.

When first responders arrived, the suspect was taken to a local hospital where he was pronounced dead a short time later.

It’s unclear if the suspect knew the home was occupied at the time of the break-in. There are also unconfirmed reports that the home had been burglarized several times in the last couple of weeks, although authorities did not indicate if they thought the same suspect was responsible for the prior break-ins.

Police stated that at this time the shooting appears to be justified, although the 59-year-old homeowner still found himself in hot water, facing charges for a misdemeanor violation of injunction. Apparently the homeowner, who had a restraining order filed against him last year, was not allowed to possess a firearm.

“It appears that there was an injunction for protection filed against him earlier sometime last year and the stipulation was he was not supposed to have a firearm on him. So at this point in time we will be charging him with a misdemeanor violation of injunction however, the shooting itself appears to be justifiable,” Sgt. Jay Farhat of the Jacksonville Sheriff’s Office explained.

Nonetheless, some neighbors are still glad that he was armed and able to adequately protect himself.

Phyllis Pitts, who has lived in the neighborhood for nearly 30 years, is still in shock that someone was shot and killed right next door to her home. She admits that break-ins have been on the rise in the area, which was once a “nice quiet little neighborhood,” and that she no longer feels safe in her home.

“The way it is now, people have to protect themselves so I guess that’s what’s going on,” she told reporters.