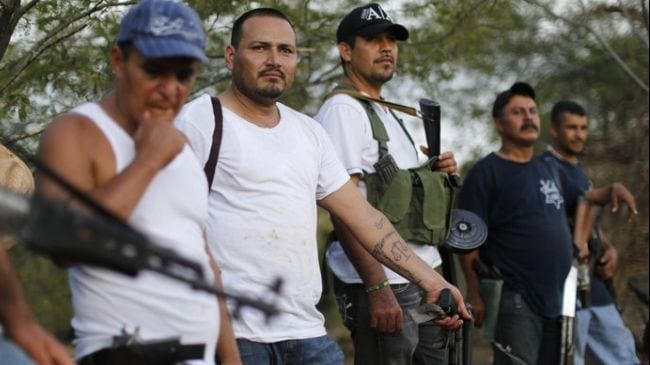 Villagers belonging to a self-defense group that formed to fight organized crime stand at a checkpoint in the state of Michoacan, Mexico, November 2013.

Vigilante groups have been standing up to the cartel more prevalently in Mexico in recent months, so the government essentially legalized the practice Monday, the Associated Press reports.

The Mexican government announced an agreement with vigilante leaders to include the armed civilian “self-defense” groups into the quasi-military units called the Rural Defense Corps. Vigilante groups, which, as the AP notes, are old and largely forgotten. Authorities and the military already tolerate and sometimes work with the vigilantes.

“The self-defense forces will become institutionalized, when they are integrated into the Rural Defense Corps,” the Interior Department said in a statement.

The vigilante groups estimate their numbers around 20,000 men. The next step in the process, the leaders of the groups have to submit a list of the members to the Defense Department and the army will oversee the groups. The vigilantes will be allowed to keep their weapons as long as they register them with the army.

The military will give the groups “all the means necessary for communications, operations and movement,” the AP reports.

The self-defense groups are made up of farmers, ranchers and some professionals, who are armed with assault rifles that civilians are not allowed to carry. It is not known if the army would offer anyone salaries.

The groups have made significant progress resisting the cartel, specifically the Knights Templar cartel. In fact, as the government and the groups made the agreement to team up, the vigilantes captured another prominent cartel leader.