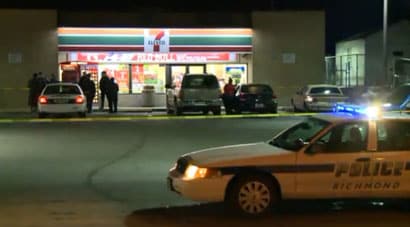 The store clerk originally thought the suspect was pulling a prank on him because not only did he recognize him as a regular customer, but he knew the gun he was holding was just a BB gun. (Photo credit: CBS)

A clerk at a 7-Eleven in Richmond, Virginia, got quite a surprise Saturday night when a customer walked in, armed with a pellet gun and demanded cash, but the suspect got an even bigger surprise when he realized the clerk was armed with a real gun.

Robert Lee Brown Jr., 36, attempted to rob the store just after 11 p.m., a local CBS affiliate reports. Apparently the clerk, who recognized the suspect as a regular customer who had come into the store several times before, at first thought that Brown was only joking.

But before the clerk could react to what he originally thought was a prank, a second clerk grabbed Brown. A scuffle ensued between the two men and Brown bit the clerk on the arm during the altercation.

Seeing that Brown was not about to back down, the first clerk pulled out a handgun and shot him. Brown then ran out of the store empty-handed.

Police caught up with Brown a short distance from the store as they responding to the call and it turned out that he only received a graze wound from the gunshot. He was taken to a local hospital where he was treated for the non-life threatening injury.

Although the clerks only suffered minor injuries during the physical altercation with Brown, retired police captain Steve Neal said that any person with a weapon – even if it isn’t a real one – should be taken seriously.

“So if I’m on the wrong side of that weapon. I’m going to take that seriously until I know otherwise,” Neal said. “Anyone that attacks you is sending a pretty clear message that their thinking is not right at the time.”

Neal recommends that if ever in a situation such as this, customers should stay alert and try to remove themselves from the situation if possible.

“We are not sure if (the shooting) was intentional or accidental,” said police Capt. John O’Kleasky, who also stated that charges are not expected to be filed against the clerk.

Brown has been charged with attempted robbery and malicious wounding for biting the clerk.