Armed burglar slaps woman with his penis during home invasion 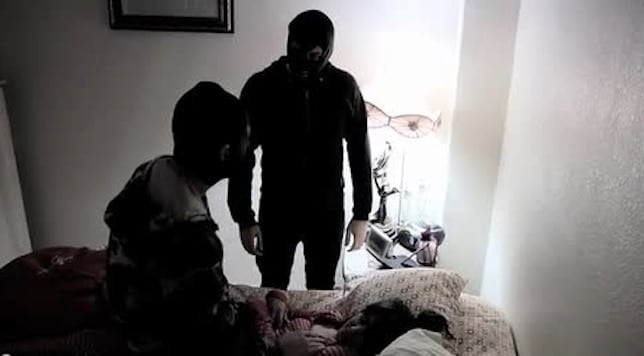 An armed burglar repeatedly slapped a woman in the face with his penis during a home invasion.

A masked gunman invaded a Florida woman’s house Tuesday, slapping her with his penis as he demanded money.

At around 3 a.m., two men knocked on the back door of the 31-year-old victim’s Miami home. Her 62-year-old father-in-law answered the door and the masked burglars barged in. When the victim told them she didn’t have any money, one suspect hit her with his penis, The Smoking Gun reports.

According to the police report, the suspect entered the victim’s bedroom and pointed his pistol at her head, saying, “Bitch, where is the money?” When he didn’t get what he wanted the masked man pulled down the woman’s shirt, took out his penis, and repeatedly struck her in the face with it.

Eventually, the men gave up looking for money and ransacked the house, stealing two televisions instead.

The woman said she was not able to provide Miami police with a description because the suspects were wearing masks and gloves.