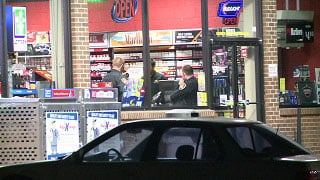 It was a busy scene with law enforcement filling the store following the failed robbery, but just hours later the store was closed and quiet as usual. (Photo credit: Local 8)

One man’s plans to rob a convenience store in Knoxville, Tennessee, Sunday night were shattered when he realized the store clerk was armed, which sent the suspect fleeing.

According to local media, it was about 8:45 p.m. when the suspect walked into the Ebenezer Market wearing a mask and demanded the clerk hand over money from the store’s cash register. The suspect indicated that he had a gun, but what the suspect didn’t know was that the clerk had a gun as well.

As soon as the suspect saw that the clerk was armed, the suspect immediately fled from the store, empty-handed, and ran south, the clerk told police.

According to the Knox County Sheriff’s Office, the store clerk acted in self-defense when he pulled his firearm and was justified in doing so. No shots were fired and no one was injured during the failed robbery.

Although the suspect has not yet been caught, the store’s video surveillance cameras did capture an image of him and the clerk was able to provide a description of the suspect.

The suspect was said to be a male approximately 18 to 25 years old. He is described as having a thin build and standing between 5-foot-8 and 5-foot-10. He was last seen wearing a white face mask, a dark sweatshirt, gray pants and black shoes. The suspect’s race was not provided with the description.

Anyone with information is asked to contact the Knox County Sheriff’s Office Crime Unit at (865) 215-2243.