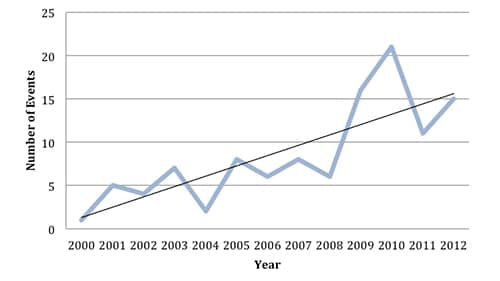 The study contends that the number of incidents have tripled in recent years. (Photo credit: FBI)

A new study released this month through the FBI’s Law Enforcement Bulletin closely examines active shooters in the U.S. from 2000 to 2012. Some of its findings mirror previous studies while others raise interesting contradictions.

Dr. J. Pete Blair, M. Hunter Martindale, and Terry Nichols compiled the study. If Blair sounds familiar it’s because he was the director of research for ALERRT, a group of law enforcement trainers who have been focused on active-shooter events for the past several years.

The study looked at 110 active shooter events found through searches of news stories from 2000 to 2012. To qualify as an active shooter event it had to involve one or more persons engaged in killing or attempting to kill multiple people in an area occupied by multiple unrelated individuals.

Moreover, researchers excluded gang shootings, domestic disputes and all incidents that weren’t deliberate attempts at mass murder, i.e. killings that were the byproduct of a robbery or other crime were omitted.

One of the tenants of modern active shooter training for law enforcement is a rapid response rather than securing the perimeter and waiting for backup. The study finds that in many cases this new strategy has been realized. The median response time was 3 minutes for all events and 2 minutes for those involving solo officers. 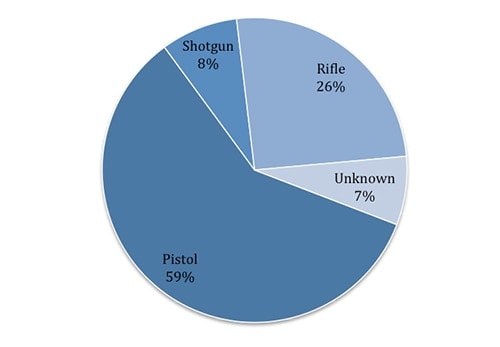 Handguns, according to the study, are the leading weapon for active shooters (Photo credit: FBI)

“In total, 13 of the 18 events (72 percent) still were ongoing when solo officers arrived on scene. Of these 13 incidents, law enforcement personnel either shot or physically subdued the shooter 12 times.”

The study concludes that the two most frequent locations for these attacks are at work (40 percent) and, sadly, at school (29 percent).

The shooters in these killings are hard to classify into a single ‘typical’ gunman as they “came from different racial and ethnic categories. The youngest shooter in the data set was 13, and the oldest was 88. Again, no clear profile based upon the demographics of the shooter was observed.”

As in other recent studies, this report revealed that the use of so-called ‘assault weapons’ is rare in these incidents. The most common weapon used, in 59 percent of cases studied, was a handgun.

Perhaps the most shocking difference in the FBI report from previous studies on active shooters is that it maintains the number of these incidents have drastically increased over the past dozen years. 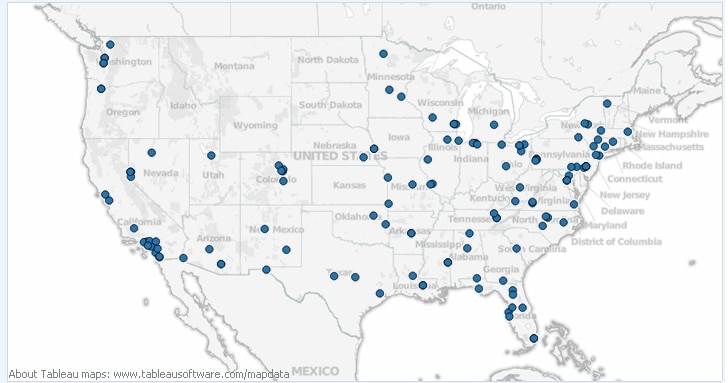 The incidents for the study took place across 44 states over 12 years (Photo credit: Scripps)

The study itself concedes that it’s possible that the data could have some inaccuracies as these events may be better reported and recognized in recent years, artificially increasing the numbers.

Questions over data reporting provides the basis for criticism from at least one criminologist.

“I’d be hesitant to declare trends based off a modest number of years and a modest amount of data,” said Dr. James Alan Fox of Northeastern University in response to the FBI’s findings.

Fox warns that researchers may have a difficult time finding older cases. “The question is in 2003, are you sure that all those cases that would today be called active shooters would have been locatable,” said Fox.

According to Fox’s own research, the number of “mass murder” has stayed relatively flat over the last 35 years.  Fox defines “mass murder” as a single incident in which a person kills four or more people, not including himself.

In conclusion, the FBI report calls for increased use of hard plate ballistic protection as well as patrol rifles and tourniquets  for law enforcement officers to better address active shooter events.  Further, it calls for the expansion of Rescue Task Forces, groups of body armored medics that could move into an event in progress to begin triage.

Finally, the study mentions the importance of civilian preparedness when caught in the midst of these high-pressure scenarios.

“Civilians need to be trained about what to do if one of these attacks occurs,” states the report.

The information on these events as well as a more complete breakdown has been compiled into an interactive map.