A Florida resident is being charged $100 a day by his homeowners association for flying a Wounded Warrior flag outside his house. 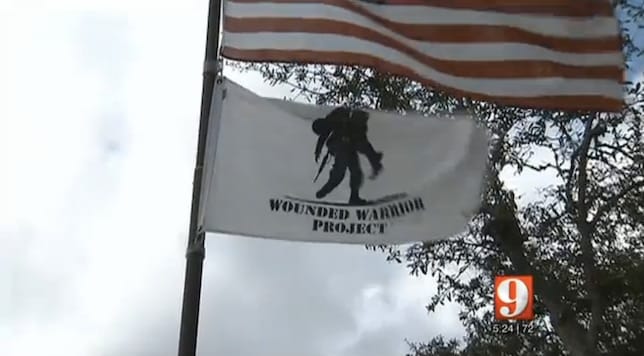 The Grand Haven homeowner’s association is fining Thomas Bagnoli $100 for every day he flies the Wounded Warrior flag.

Thomas Bagnoli has lived in the gated community of Grand Haven in Palm Coast for 13 years. He flies an American flag above a Wounded Warrior flag, but his homeowner association is now threatening to fine him up to $1,000 and says they’ll put a lien on his house if he doesn’t stop flying the Wounded Warrior flag. But Bagnoli refuses to listen, WFTV reports.

“They can do whatever they want,” Bagnoli said defiantly. “I’m doing what I want. I feel strongly about this.”

The association’s rules don’t preclude homeowners from flying the American flag, a POW MIA flag, flags representing various branches of the military, the flag of a favorite sports team, or pretty much any other flag, except that of the Wounded Warriors.

Bagnoli can only be fined a maximum of $1,000, and even though his homeowner’s association said they’ll be putting a lien on his house, he refuses to take down the flag. He says that if and when he decides to sell his house, then he’ll pay the association their money.

According to Bagnoli, his neighbors aren’t offended by the flag, and he has actually received encouragement from them. One person even offered to pay his $1,000 fine as long as he kept the flag waving, which he plans to do until the war in Afghanistan ends.