Two robberies in under two hours leaves one suspect dead, another shot and a woman in critical condition (VIDEO) 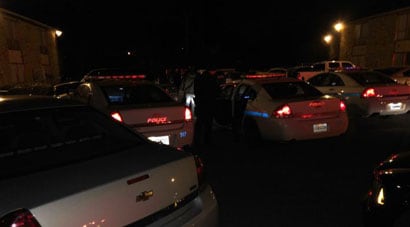 A second bloody battle in the same night at a Shreveport, Louisiana, apartment complex Tuesday left one suspect fatally shot and a female victim fighting for her life, according to a report by local media.

Police received the first phone call around 10 p.m. A female resident, whose name has not been released, was inside her apartment when two men smashed the windows on her car and apparently took something from the car before forcing their way into her apartment.

The two suspects were armed, but so was the victim. There was an exchange of gunfire, but it is unknown if the suspects were hit. However, the victim was struck in the shoulder and abdomen.

Leroy Roberson, who lives in the apartment complex, heard the gunshots, then a short time later a knock at his door.

“Sat down on the couch and just waited and she knocked on the door bleeding to death,” Roberson said.

He admitted that he was at a loss as to who would want to harm the woman. “She doesn’t bother anybody. She just works and goes home,” Roberson said.

The woman was rushed to a local hospital. Her current condition is not known, but authorities did confirm that are injuries are believed to be life-threatening.

Less than two hours later, police received another rash of calls to the same apartment complex. Callers reported hearing more gunfire, the result of yet another home invasion.

This time two men and one woman – one armed with a rifle and one armed with a handgun – broke into a male resident’s apartment demanding money. But apparently the resident, who was also armed, wasn’t about to give up his cash.

According to Cpl. Marcus Hines of the Shreveport Police Department, the suspects opened fire on the victim, who then returned fire. The victim was grazed by a bullet, but not before striking two of the suspects.

“Once I come outside I heard gunfire, I see two guys running in but one guy came out and you see the guy lying dead on the ground,” one neighbor, Tresmone Kennedy, said. “We’ve got kids and stuff and there’s gunfire everywhere, bullet holes all through people’s windows and stuff. I just felt bad.”

Once police arrived, the suspect was pronounced dead. Officers also believed that a second suspect was shot because they found a separate blood trail from the victim’s apartment.

Witnesses say that the two suspects left the third behind and drove off in a red Chevy Impala. Authorities are still searching for the remaining two suspects.

The male victim was taken to the hospital where he was treated and released.

Police did not indicate whether they believed the same suspects were responsible for both home invasions.