Armed with a script and movie props, a group of YouTubers called “action” for a staged robbery at a Lowell, Massachusetts, convenience store, but forgot to talk to local authorities first.

Amateur filmmakers Aamer Nazami, Pat Farrell and Josh McGlouflin had the robbery scene all planned out. Farrell donned a black ski mask and aimed his toy gun at the clerk, who was also part of the video. When the group spotted a police cruiser outside, they broke character to explain to them what was happening, but found themselves on the ground and in handcuffs before they had the chance, CBS Boston reports.

“As soon as I walked out I was greeted with the sight of what looked like 20 police officers screaming at me,” Nazami said. 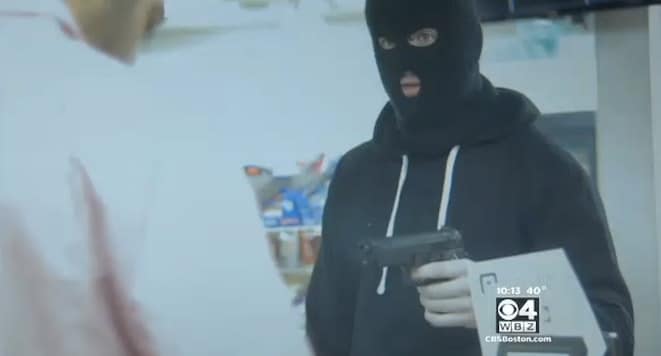 The YouTuber’s acting must have been convincing because responding police officers thought they were interrupting a real robbery.

“I was pretty afraid,” Farrell said. “It’s kind of a serious situation when the cops are involved.”

Police thought they were interrupting a real robbery and treated the YouTubers like they would any other real-life criminal. (Real) Guns drawn, officers swarmed the store and ordered them to the ground. They quickly complied.

Lowell Police Chief Capt. Kelly Richardson was good-natured about the lack of communication, and was just happy nobody got hurt.

“At the time it wasn’t too funny,” he said. “We laughed about it today, but someone could have been hurt doing this. Common sense goes a long way.”

No arrests were made and the film crew and actors were free to go on their way, but Richardson feels confident they learned their lesson.

The police chief advises anyone else looking to film a staged crime to notify police ahead of time.