With two anti-gun Colorado state legislators recently voted out of office and a third retiring facing another recall election it’s clear that gun control isn’t the non-issue so many in office assumed it would be.

Now several legislators are working to repeal the laws passed early last year in Colorado, with a new package of house bills that would roll back the recent changes.

Although Colorado citizens recently voted to recall two proponents of the gun control package, including then state Senate President John Morse and Sen. Angela Giron, the Democratic Party still holds a majority by one vote. A third recall attempt against Sen. Evie Hudak resulted in Hudak resigning, allowing the majority to select their own replacement candidate.

But before they can be voted on they must first pass the State, Veterans, and Military Affairs Committee, which is known informally as the “kill committee.” The committee votes on whether or not proposed legislation hits the state house or senate floor.

The committee has been used by both parties to knock back legislation that is unpopular with the majority, explains the Colorado Second Amendment Association. 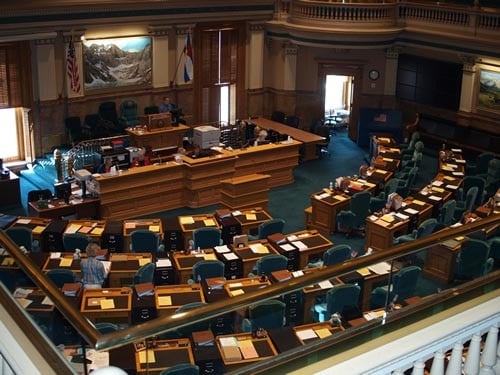 Inside the Colorado statehouse.

“The bills listed below include several that would outlaw parts or all of the 2013 gun laws forced upon us by agenda-based, out-of-state interests.  The passage of those laws was so onerous that it resulted in Colorado’s first recalls of sitting state legislators by a citizenry insulted and ignored by its elected government.  These may very well be some of the most important bills that we are going to see pass through our Legislature this year.  Yet the bills were sent to their respective ‘kill committee,’ in what could easily be viewed as another sign of contempt for the voting public of Colorado.”

Six bills have been proposed, coming from both the state house and senate.

Still, with the recent recall elections and polls showing increased calls to repeal existing gun control laws, it may not be business as usual for the committee. And the magazine capacity limit, by far the least popular of all the recently-passed gun control bills, is facing repeal in both the state house and state senate.

The magazine ban and the mandatory background check bills are still headed toward the courts, as well.

Originally backed by an overwhelming majority of the state’s sheriffs, a judge recently ruled that the law enforcement agents could not sue the state as civil servants. The ruling did allow them to hang on as plaintiffs, joining the gun rights and civil rights organizations and manufacturers also backing the suit, including Magpul, who is moving manufacturing of all their products to Texas and Wyoming in protest of the new laws.

Gun rights supporters have rallied across the state following the passage of the gun control package. Recently the town council of Castle Rock, Colorado, repealed a decade-old ban on the practice of open-carry, by a vote of four to three.

“My point-of-view is to restore the constitutional rights to the people of Castle Rock,” said Mayor Paul Donahue to the Coloradoan. Donahue supported the repeal.

“Our freedoms are constantly being stripped away and the decision to repeal the open carry ban sets Colorado on a course of restoring freedom, rather than limiting it. Castle Rock Second Amendment supporters stood up for their rights and in doing so have invigorated gun rights supporters across the country,” said political director Joe Neville of the Rocky Mountain Gun Owners foundation.