Gallup poll: Americans seeing gun laws as too strict has tripled since 2013 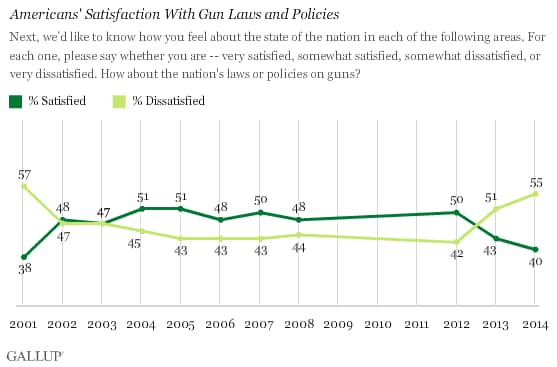 Numbers of Americans dissatisfied with current gun laws are the highest in 12 years (Photo credit: Gallup)

Fifty-five percent of Americans said they were not pleased with current U.S. gun laws, the highest figure since 2001, according to a recent Gallup poll.

The survey was part of Gallup’s annual ‘Mood of the Nation’ survey, which measures 19 different issues.

The poll found that Americans were the most satisfied with the nation’s military and least with its ability to control poverty, homelessness and the economy.

When Gallup’s pollsters asked people if they were satisfied with current U.S. gun laws and policies, 55 percent of Americans surveyed were “dissatisfied” compared with only 40 percent who were “satisfied.”

This figure, which historically has been in the 43-45 percent range for the past decade in the poll, was a marked increase. In fact, it was the highest in the history of the poll going back to 2001 when dissatisfaction was at 57 percent.

Put into context, 2001 was during the middle of the Federal Assault Weapons ban. That ban, put into effect in 1994, encompassed so-called ‘high-capacity’ magazines and ‘assault weapons’ nationwide until its provisions expired in 2006. 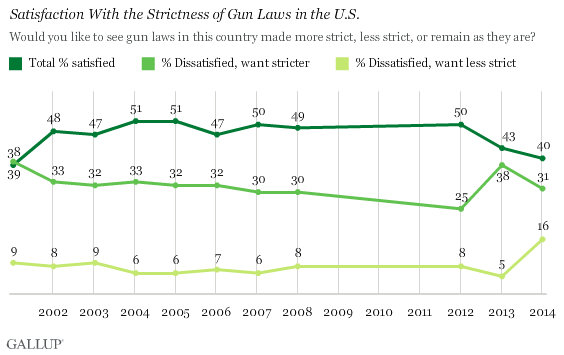 Gallup found a threefold increase in the number of those who thought gun laws should be less strict. (Photo credit: Gallup)

When pollsters asked respondents, “Would you like to see gun laws in this country made more strict, less strict, or remain as they are?” Sixteen percent stated that the current laws were too strict. While this sounds low, this figure is a more than threefold increase from last year’s figures of just 5 percent.

Meanwhile the number of those who wanted to see stricter laws fell dramatically from 38 percent last January to 31 percent this year.

It should be remembered that last year’s survey was done only weeks after the December 2012 mass shooting at Sandy Hook Elementary School in Newtown, Connecticut.

There are other indicators that the urge to enact gun-control measures has cooled, e.g. the fact that the President’s State of the Union address included only passing references to pushing through tougher gun laws.

As to what this all means, Gallup ventured to say the following:

Americans have become more dissatisfied with gun laws over the past year, but this is attributable to a greater percentage who say gun laws are too strict, rather than not being strict enough. Americans’ changing views could set the course for future gun law debates and legislation.