In a recent interview with The Blaze, Ted Nugent paused from responding to earlier comments he made to Guns.com to metaphorically scrape Piers Morgan’s brain mater from his shoes.

Guns.com spoke with the Motor City Madman at the 2014 SHOT Show, where he explained his position on the “gun debate” and talked about his potential presidential pursuits. During his interview with The Blaze, The Nuge took a brief respite from commenting to remove his shoe and pick at pieces of Morgan’s “brain” with a pocket knife. 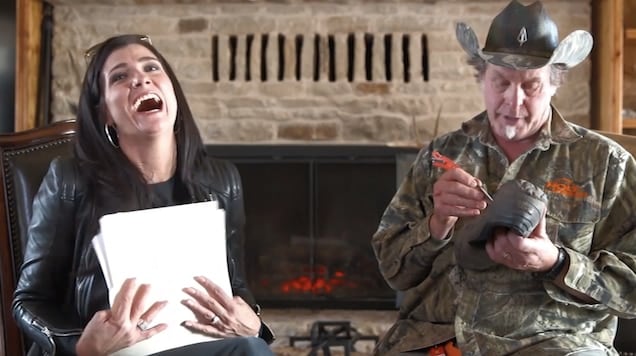 Nugent took a quick break from his interview to scrape Morgan’s “brain mater” from his shoes.

“None of my haters would ever dare debate me face to face because they know I’ll do the Ted Nugent-Piers Morgan skull boogie,” Nugent said before taking off his shoe and whipping out his pocket knife. “You’ll have to excuse me, Dana,” he said, scraping off “shards” of Morgan’s “brain matter.”

Morgan was quick to respond to Nugent, tweeting, “I’m still looking for Ted’s.”

“Debate me. Bring me on your show,” Nugent offered to anyone willing to host him. “Teach me a lesson, because I’ll eat your guts.”

Here’s the original interview with Guns.com that Nugent was responding to.