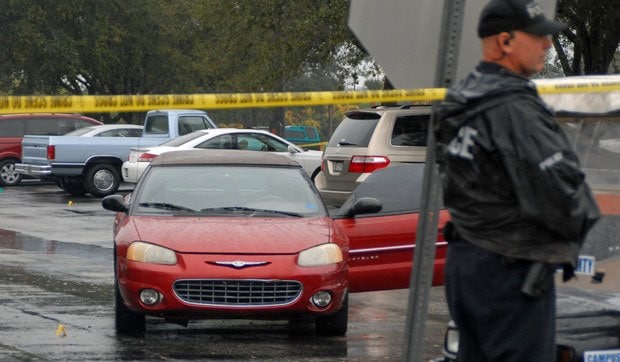 According to an account by one witness, one of the brothers was beating, kicking and stomping on a man seated at the driver’s side of the car before the gunshots rang out. (Photo credit: Florida Today)

A verbal argument at a Palm Bay, Florida, college Thursday afternoon escalated into a physical confrontation, which eventually resulted in one of the men being shot.

But according to local media, all of the men involved are claiming self-defense and the shooter, whether he acted in self-defense or not, is facing disciplinary action for violating the school’s no weapons policy.

Landrick Hamilton was in a parking lot outside of the main building at Eastern Florida State College about 1:30 in the afternoon when he was approached by brothers Amado and Landyer Contreras.

The three were involved in a verbal argument before the two brothers began beating Hamilton, witnesses stated. But as the beating continued, Hamilton was able to retrieve a handgun from his car and shoot Amado once in the chest.

Campus security as well as the Palm Bay Police Department responded to the shooting within one minute.

The school was placed on lockdown for about an hour and a half and classes were canceled for the rest of the week.

Amado and Hamilton were both transported to a local hospital for treatment of their injuries. Amado remains in fair condition with what authorities described as a non-life-threatening gunshot wound. Hamilton was treated and released for head injuries he received during the beating. Landyer was not injured during the incident.

Police recovered a broken pool cue in the parking lot which they believed the brothers used as a weapon against Hamilton during the altercation.

All three men are claiming self-defense though and at this point none of them have been arrested. The case will be reviewed by the State Attorney’s office to determine what charges, if any, will be filed.

Hamilton, who does not have a previous record of any problems with the school, will likely face disciplinary action, including expulsion, for bringing a firearm on campus property.

State law prohibits possessing or exhibiting firearms on college and university property, but the same law also permits guns to be stored in vehicles while on campus. Almost eight weeks ago a state appeals court struck down a regulation at the University of Florida, which EFSC is a part of, which bans firearms on campus altogether, including storing them in vehicles.

However, EFSC spokesman John Glisch said they have asked the court to rehear the case and until then, the ban will remain in place, meaning that Hamilton likely did violate the policy.

“If it was his gun, and he did bring it onto campus, he’d be subject to student discipline up to and including expulsion,” Glisch stated, adding that the school will wait for the full police report before taking any action.