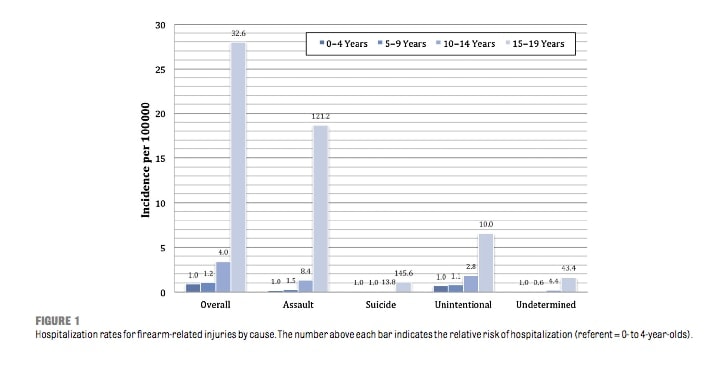 The Pediatrics report on children injured and killed by firearms each year has come under scrutiny for including 18- and 19-year olds. (Photo credit: Pediatrics)

Children and guns is a hot topic and a much debated one. Opinions on the issue are rightly divided, with some saying that the combination is lethal, while others say that introducing children to guns at a young age may help to decrease the chance of accidents later.

Last week ABC aired a special showing how young children left alone in a classroom react when they find a gun without an adult around. In the days prior to the hidden camera experiment, the children participated in two gun safety classes, but even then, parents were shocked to see what their little ones did when they found the firearms.

Two of little boys, who looked to be about kindergarten age, picked up the guns before attempting to tell an adult what they had found. One boy remarked that he was checking to see if it was real, as they found it sitting in a box of toys.

Additionally, the special coincided with a report released by Pediatrics last week, which revealed that a child is sent to the ER with a gunshot wound nearly every hour in the U.S. However, the report on “children” has come under some scrutiny for including 18- and 19-year-olds in the study, which significantly increased those numbers. Furthermore, the overwhelming majority of accidental shootings involved teens, not young tots like those who are portrayed in the ABC special.

But some didn’t seem surprised by the boys’ reactions, including Dr. Robert Glatter, an emergency room physician at Lenox Hill Hospital in New York, who said at one point he was seeing about two children each week due to accidental gunshot wounds.

Travis Taylor’s family lives on a rural farm in Ohio and although he taught his boys gun safety from a young age, he was still met with tragedy when his 10-year-old son was accidentally shot and killed by his younger brother.

“They had been hunting since they had really been able to walk with me,” Taylor said. “I taught them all from a young age, you don’t mess with guns no matter what, you know, no matter what, if you see a gun, you treat it like it’s loaded all the time.”

Kyle Coplen, founder of the Armed Citizens Project which offers free shotguns and training to single women, believes that the responsibility falls on parents.

“The children that have been properly trained and know how serious firearms are, are not going to be kids that are going into their parent’s room and playing with their firearms,” Coplen said. “You kill the curiosity before the curiosity kills the kid.”

Taylor thought the curiosity was gone, but he was wrong.

He now keeps his guns at a friend’s house and admits that he’s not really sure if he’ll ever be able to bring them back. 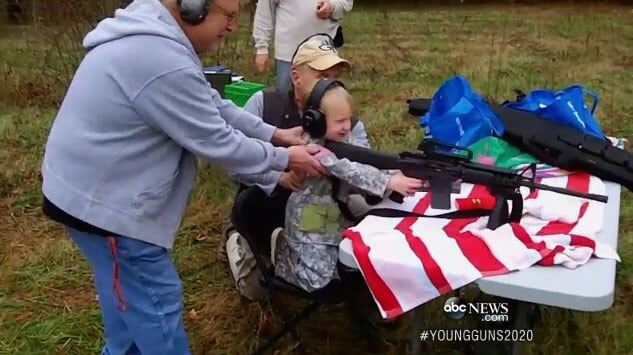 Should 4-year-olds be taught to use a gun? Opinions vary. (Photo credit: ABC)

Nonetheless, there are some parents who still believe that teaching their children about guns at a young age is important to prevent accidents, including Latham and Jennifer Doxey of Douglasville, Georgia, who have taught their 4-year-old son, Charlie, the basics of handling a gun.

“There are a lot of accidents that happen because kids aren’t properly trained to use guns,” Latham Told ABC. “So it’s either education or ignorance, is the way we look at it… I would rather be the one to show our kids the proper way to use guns.”

“You can’t wrap your kids in bubble wrap,” Chad said in an interview. “You can make them wear a seatbelt every time they get into a car and they still may die in a car accident.”

Their daughter, Katie, can put most grown men to shame with her sharp shooting skills. She first learned to shoot when she was just 5-years-old and now the teen is one of the top competitive shooting champs in the country.

“You have to teach them responsibility with a weapon,” he added. “If you don’t they’re going to be curious and they’re going to find it, and they watch TV, they know how to put their finger on the trigger and squeeze.”

I’m inclined to agree with Chad Francis. As much as parents want to protect their children from every single bad thing in the world, unfortunately sometimes that just doesn’t happen. And while you can’t avoid those bad things always, there are some steps that can be taken to teach your children safety and responsibility, and that, in my opinion, can help to reduce accidents.

However, as Coplen pointed out, regardless of what is or is not taught, the ultimate responsibility still falls on the parent. An opinion that again, I’m inclined to agree with. And just as children should be taught that every gun should always be treated as if it’s loaded, always, I believe that parents also have the obligation to continue to act as if their child’s curiosity will still remain.

In other words, I can teach my boys all the gun safety in the world, but that doesn’t mean that just because they’ve been taught those rules that I should leave an unattended and loaded firearm lying around for curious hands. I want to believe that my boys will do as they’re told even when I’m not hovering over them like the watchful mother hen, but I know that’s not reality, at least not for me and my boys. They continually test their limitations and that’s not something I’m willing to take a gamble with when it comes to guns.

In addition, every child – and every parent – is different. What works for one person may not work for another and just because something works for one child doesn’t mean it will work for the other. I don’t believe that there is a magical age in which gun safety should be taught either. I think it’s more about a child’s maturity level than the number of years they’ve been on this earth. And I cringe when I hear a parent talking about teaching their 4-year-old to be safe with a gun, only to see a picture of that child with his tiny fingers all over the trigger before he’s ready to shoot – or even looking at – the target.

What’s your take on this hotly-debated topic?