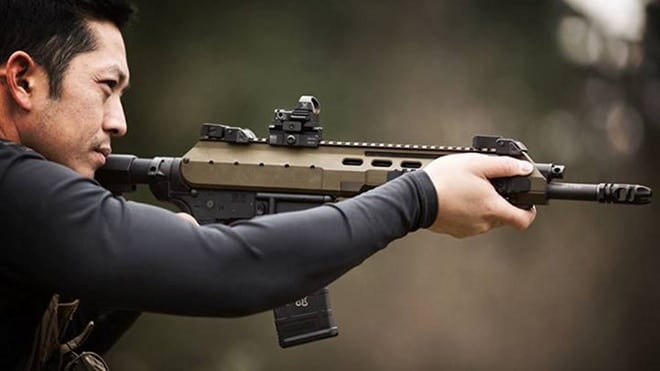 Faxon Firearms is bringing a left-handed version of their ARAK-21 AR-15-compatible upper receiver to the market for 2014. This relatively new piston-driven upper works with AR-15 lowers but has more in common with AK-47 and FAL rifles when it comes to operation.

The ARAK-21 upper is completely self-contained and does not need a buffer system. The upper uses long-stroke piston operation and the bolt carrier group rides on hardened steel rails like an AK. The adjustable gas regular is based on the FAL design, one of the toughest, most robust systems ever fielded.

Luckily for ARAK users, company president Bob Faxon is a southpaw. The ARAK was designed with a reversible bolt and a right-side ejecting upper has always been a part of the plan. It may have taken a year longer to bring to the market but this is welcome news for left-handed shooters looking for something made just for them.

Faxon doesn’t currently manufacture lower receivers, not that they really have to.

While left-handed lowers are uncommon, fully-ambidextrous lower are available, from boutique builders to major names in the AR business, including Aero Precision and Mega Arms.

And while they no doubt would rather have you use one of their uppers, there really isn’t anything else on the market like an ARAK-21.

In addition to being fully self-contained, which eliminates the possibility of carrier tilt, a problem that affects some piston-driven AR-15 systems, the ARAK-21 doesn’t use a buffer assembly allowing the use of non-traditional buttstocks, including folding stocks. The upper uses a modular barrel assembly and re-configuring it with different length, weight and caliber barrels is very simple.

Currently Faxon offers nine different barrels for the ARAK, from pistol or SBR lengths to rifle lengths, in different weight profiles, medium and heavy and in either 5.56 NATO or 300 AAC Blackout. While it isn’t a true quick-change system, it is fast and only requires a field strip and a hex wrench. Faxon sells upper kits with two barrels, or the user can buy barrels separately. Faxon recommends individually-purchased barrels to be professionally checked for headspace although they are drop-in parts. All the ARAK barrels come fit with a muzzle brake of Faxon design.

The receiver-contained recoil assembly makes the flattop rail slightly taller than on a standard AR-15 upper, which means the user will have to select sights and stocks appropriately. The ARAK upper uses a non-reciprocating forward charging handle, not an AR-type rear charging handle, so it can be paired with stocks fit with a cheek riser in conjunction with AR-height sights. 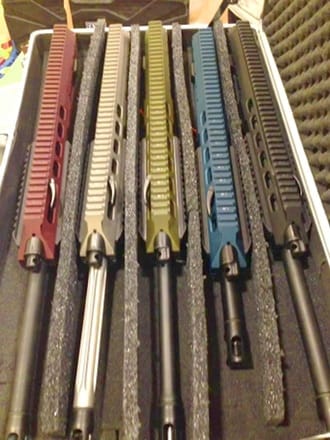 The front end of the receiver can be modified with additional Picatinny rails for accessories, like grips, lasers, lights and bipods. With a 16-inch barrel an assembled upper is greater than 26 inches long and doesn’t have the ATF definition of a “pistol” it’s just a “firearm” and can be used with foregrips without a stock.

Another thing that makes the ARAK stand out is the spread of colors Faxon makes them in. The machined upper receiver is hard-anodized in the user’s choice of red, blue, silver, green and of course, black. Left-handed uppers are likewise available in those five colors.

Faxon sells their upper directly through their website as well as through retailers. Uppers with a single barrel run $1,199, two-barrel combo uppers $1,459 and individual barrels for $429.

Faxon Firearms is also dipping a toe in the AR-15 market with a trio of carbine-length barrels in different profiles and finishes. For more information and details head over to the company website and check out their Facebook page for updates and product news.