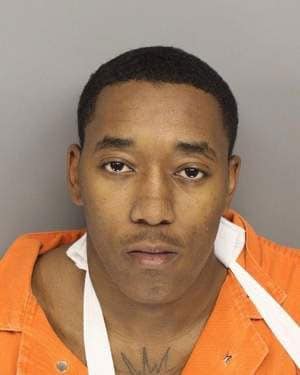 Calvin Jequan Benson apparently suffered all night before he sought medical attention for the gunshot wounds he sustained while attempting to rob a restaurant. (Photo credit: Greenville County Sheriff’s Office)

A Greenville, South Carolina, man found himself behind bars following a trip to the hospital after he attempted to rob a restaurant and was shot by an armed employee instead.

Armed with a gun and wearing a mask, the suspect walked into the restaurant Thursday night about 10 p.m. looking for some easy cash, a Fox News affiliate reported.

“Just looked up and there’s this masked person with a gun in my face,” Stephanie Evans, co-owner of the restaurant recalled. “He just simply said, ‘Give me what you have. Give me all of it.’”

But Evans wasn’t able to hand over any money.

“Before I could give him anything, I heard a gunshot and I actually thought it was me, and I just dropped to the floor,” she said.

However, it wasn’t the would-be robber who fired the shots, but a quick-thinking employee who was set on protecting not only himself from the armed suspect, but his boss, Evans.

“He kind of took his eyes off me for like two seconds and I was able to run to the back,” Antwain Motin said. “After I shot him, he kind of shimmied a little bit like he was falling or whatever and took off.”

The suspect, who was later identified as 22-year-old Calvin Jequan Benson, ran out of the restaurant. Officers, complete with K-9 units, arrived a short time later and searched the area, while paramedics remained on standby for the suspect who was believed to be shot, but they didn’t find Benson.

However, the following morning police received a phone call from a local hospital when Benson showed up for treatment for gunshot wounds. He now faces charges for attempted armed robbery and possession of a weapon during a violent crime.

While Evans is still shaken up over the ordeal, she has some advice for the man who stuck a gun in her face.

“If you want something, work for it,” she said. “If you don’t have it and you need – it’s better to ask and I’ll be happy to give what I have than for somebody to stick a gun to my face.”