PTR Industries relocated from Connecticut to South Carolina in protest of the recently-passed gun control in their home state last year, gaining national attention in the process. The gun maker has set up shop in Horry County and the first Carolina-made guns are now rolling off the line.

In a twist, the first guns are stamped “Made in Connecticut,” owing to the fact that the receivers were imported with them during the move. Many of the parts in their inventory were made at their original facility.

“The parts were manufactured back in Bristol, Connecticut where the company originated from. They’re being assembled and then shipped from this location,” said PTR manager and Horry County councilman Bob Grabowski to Carolina Live. 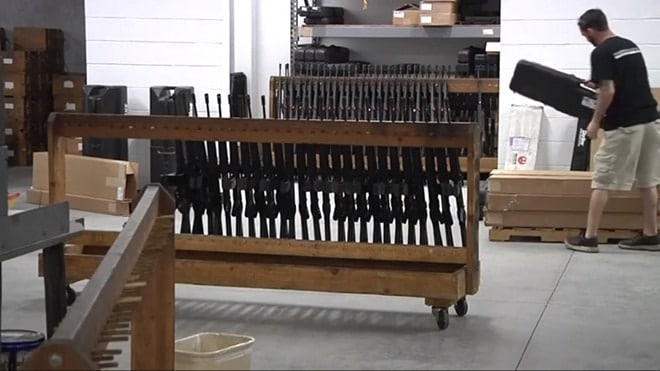 Grabowski said that the new facility has about half the equipment they need up and running and they are still producing some CNC-machined parts in Connecticut. Rifles with South Carolina stampings will be shipping later this month.

To-date PTR has moved about 200 firearms already with many more shipping every day. The company makes a wide variety of Heckler & Koch HK91-based firearms in classic and original configurations with a few modern updates. Their guns are becoming increasingly popular, just as the company is developing a reputation for their strong convictions towards the Second Amendment.

The company employs 30 people at the new shop and will expand on that to 150 in the next few years. “This is something new and I love guns, and so I’m just excited about this company being here,” said new hire Bridget Foley.

Of course, it’s not hard moving rifles now, even though most of the crunch seems in the wake of the current gun industry. Still, the increasing base level demand for guns and accessories is more than enough reason for any gun manufacturer to expand.

PTR’s new building gives them roughly double the floor space, which they have full intention of using.

At SHOT Show we caught up with South Carolina representative Alan Clemmons who had this to say about PTR’s decision to relocate and some of what it entailed.