Mass. panel seeks to deem those arrested, but not convicted, as ‘unsuitable’ to own a firearm (VIDEO) 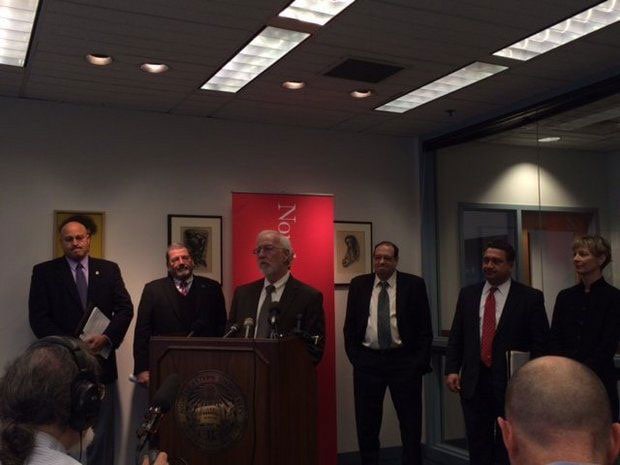 A panel of specialists in Massachusetts released a report this week laying out a 44-point plan to reduce gun violence in the state, which would include enhancing school safety, expanding background checks, submitting more records to the NICS database and better defining who is considered “unsuitable” to own a firearm, such as those who have been arrested, but not necessarily convicted of a crime.

The eight-person panel is headed up by Jack McDevitt, a Northeastern University criminologist, and also includes the Natick police chief, a former state mental health commissioner, a Harvard public health researcher, a former gang prosecutor in Suffolk County, a psychiatrist, and the superintendent of Revere schools.

Although the panel readily admitted that the state already has some of the toughest gun laws in the country, they still felt there was more that could be done to make better progress. The focus was to come up with a plan of action that was backed by academic studies as well as one that was politically feasible.

“What we realized is that we wanted to see change, we wanted to see progress, but we also wanted to be realistic in proposing changes that would have a chance of passing,” said committee member and former Massachusetts inspector general Robert Cerasoli.

In fact, while the panel proposed some greater gun control measures, there were other proposed ideas that they tossed out, including long sought after legislation by Gov. Deval Patrick to limit gun purchases to only one per month, as well as limits on magazine size.

Nonetheless, The Gun Owner’s Action League of Massachusetts, the state affiliate of the National Rifle Association, is “disappointed” with the plan of action and the fact that they feel they were all but ignored by the panel as they compiled their recommendations.

“If the Commission refuses to hear from the very people that actually know the gun laws and provide the most comprehensive gun safety training in the Commonwealth – it’s not worth the paper it’s printed on,” the group said in a statement.

But perhaps even more upsetting to gun-rights advocates was the report’s recommendation to clearly define and broaden the definition of a person who is “unsuitable” to either possess a concealed carry license or even own a gun.

According to the report, this should include those who have been arrested, even if the arrest never resulted in a conviction. The panel believes that the current system gives local law enforcement too much discretion to decide who is and is not considered “unsuitable.”

Yet Jim Wallace, executive director of the Gun Owners Action League, believes that police chiefs have already abused their power to make it difficult for law-abiding citizens to obtain a handgun license.

Currently, the suitability requirement only applies to those seeking a concealed carry license, but the report recommends that requirement be extended to also include those wishing to purchase a shotgun or rifle.

Regardless, committee members already expected opposition from both sides of the gun argument before the report was even completed.

The report recognized Massachusetts as “a leader nationally in efforts to reduce gun violence” and while the panel realized that the changes would be “challenging,” they would “if adopted, provide a pathway to further reduce gun violence.”