Prof. Kopel on Colorado lawsuit: 'I think it's a strong case, that's why we brought it' (VIDEO)

At SHOT Show 2014, Guns.com had a chance to briefly catch up with Second Amendment luminary Prof. Dave Kopel.

For those unfamiliar with Kopel, he is an associate policy analyst at the Cato Institute, research director of the Independence Institute, and adjunct professor of Advanced Constitutional Law at Denver University, Strum College of Law.

Kopel was at SHOT promoting a documentary called “Assaulted: Civil Rights Under Fire.”

I asked the professor about the significance of the film.

“Assaulted is a very constructive step forward in public education,” explained Kopel. “It’s the first pro-Second Amendment documentary that’s ever had a theatrical release and it shows an important part of the Second Amendment story that lots of people don’t know, which is the civil rights aspect and how gun control in this country has historically been race control.”

In addition to discussing the documentary, I asked him about the current state of affairs in the Centennial state, specifically if Colorado’s recently enacted gun-control measures — an expanded background check mandate and a ban on magazines that hold more than 15 rounds of ammunition — would be repealed by state lawmakers.

“Not with the current governor,” quipped Kopel, alluding to the fact that Democratic Gov. John Hickenlooper strongly backed both measures, “but there’s going to be an election this year so perhaps that might change.”

Kopel then spoke about his legal efforts to undo these new laws. 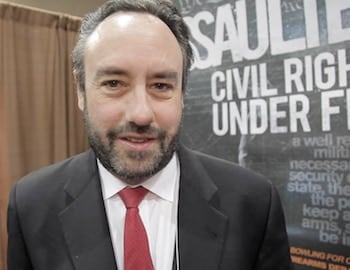 “I am one of the lawyers in a lawsuit brought by sheriffs, civil rights organizations, disabled people, FFLs, challenging those anti-gun laws in federal district court and the trial will begin on that on March 31.”

“I think it’s a strong case, that’s why we brought it… But you can’t predict what a court’s going to do,” he added.

Lastly, I asked Kopel about whether the high court would render a decision on bans relating to so-called ‘assault weapons.’

“Probably the first chance the court will have to review a case like that would be the New York ban because that’s already been decided by the district court and then you got to go to the Second Circuit Court of Appeals.”

Kopel is, of course, referring to the recent ruling on the controversial New York SAFE Act, where a federal judged upheld a majority of the comprehensive gun-control legislation. Nevertheless, both the state and the plaintiffs in the suit (various gun owners, gun dealers and gun-rights organizations) plan to appeal.

He then joked about how gun-control advocates do not want the Supreme Court to rule on the issue until the bench gets a makeover so that it becomes more partial to supporting tougher gun laws.

“Obviously, the other side wants to slow things down, hoping that Justice Scalia retires, Justice Alito gets run over by a bus or something and an Obama appointment could trade an anti-gun majority on the Supreme Court,” Kopel concluded.