An American Legend: Annie Oakley and Her Guns

Be it a rifle, shotgun or revolver; a gun in the hands of Annie Oakley was guaranteed to entertain.  Annie’s story is an American life of hard work, strength of character, god-given talent, great guns and even better shooting. Her name and story is one that all gun lovers must know. 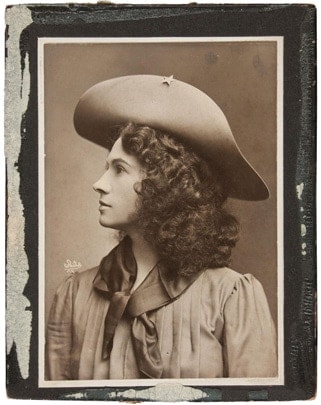 Portrait of the famed shooter (Photo Credit: Library of Congress)

Who Was Annie Oakley?

The sharpshooter known as Annie Oakley was actually born Phoebe Ann Mosey on August 13, 1860 in a rural Ohio cabin. Shaped by a difficult childhood of loss, poverty and hard labor Oakley began trapping and hunting at a young age to support her mother and siblings. By the time she was 15 she had sold enough hunted game to dining establishments to pay off the mortgage on her mother’s farm. Oakley’s great hunting and shooting prowess earned her local recognition and a nearby businessman funded her to challenge Frank Butler. A traveling marksman and exhibition shooter who went town to town contending he could beat the best local shooter. Certainly, he was not expecting his greatest challenge from a diminutive 15 year old beauty. When Butler missed his 25th clay bird, Oakley won the purse and his heart. He courted the little gal and they married soon after.

Little Sure Shot of the Wild West

In love for life, Oakley and Butler began performing exhibition shooting together before joining Buffalo Bill’s Wild West Show. As one of the most memorable stars in the Show, Oakley essentially became one of America’s first female heroines. Standing barely five feet tall, Oakley was given the name “Watanya Cicilla”—Little Sure Shot—by fellow performer Chief Sitting Bull. She performed for Queen Victoria of the UK, the King of Italy and the president of France. One of her most well-known feats came at the request of German Kaiser Wilhelm II, when she shot the ashes from a cigarette held by the newly crowned Kaiser. It is unknown who quipped if Annie had shot the Kaiser instead of his cigarette, she could have single-handedly prevented WWI. However, it is clear that following the gruesome outbreak of WWI, Oakley sent a letter to Wilhelm requesting a second shot. Strangely enough, he never replied. Nor did the pair of American Presidents McKinley and Wilson. To whom she offered herself and a hand-trained regiment of 50 female sharpshooters. They offered to furnish their own arms and ammunition and presented their services at no cost to the government.

Despite the difficulties she faced, including both train and automobile accidents—which subsequently led her into a stage career—Oakley never ceased shooting and introducing women to firearms. In fact, she shot competitively well into her 60’s and taught over 10,000 women how to shoot a gun and was a direct role model for several other skilled female sharpshooters. She continued shooting and setting records until 1924, when health problems slowed her passion. She passed away on November 3, 1926. Her love, Frank Butler, was so distraught that he ceased eating and died 18 days later.

One of Oakley’s most famous tricks involved her .22 rifle and repeatedly splitting a playing card on edge at 30 paces, then putting several more holes in it before it hitting the ground. She smashed flying targets from atop a running horse and shot dimes out of the air from 90 feet away. Perhaps most amazingly, she reportedly shot 4,472 of 5,000 clay targets in a single day. I don’t care who you are, that is a lot of shooting. In what is the only known recording of Oakley, done by Thomas Edison in 1894, she used a lever action rifle to break small glass balls thrown into the air by Frank.

Annie Got Her Guns

While Annie seemed to be a sure-shot regardless of which gun she wielded, there area few arms that people will forever link with her image.

Perhaps the most well known—and lately in the public eye—is Oakley’s Parker side-by-side shotgun. She traveled with the gun to England as part of Buffalo Bill Cody’s Wild West Show around 1887. The gun is best known for its use during her performance for Queen Victoria’s Golden Jubilee, where Annie wowed crowds of royalty with her marksmanship. Her Parker sidelock 12 gauge featured double triggers, case hardened trim, 30 inch barrels and fine engraving. The gun created quite a buzz when it hit the bidding block in 2012, selling at a Dallas auction house for $143,400. Her Marlin .22 rifle sold for $83,650 in the same auction.

During Oakley’s European tour, she reportedly became disenchanted with the Parker company. Weighing in at 7 pounds and 9 ounces, her Parker shotgun was not only heavy, but did not fit her well. Custom gunmaker Thomas Lancaster showed her that the gun was not adequate for her in weight, length, stock drop and pitch. He built a new double to her specifications and from then on she insisted that all her guns have the same fit. Having guns better built for her small frame, Oakley gifted the Parker to her brother-in-law upon arriving back in the States. The auction served to reinvigorate public interest in Oakley, whose legacy is back in the public eye for another generation of shooters.

Built in 1872 and given to Annie by Buffalo Bill, this beautiful rifle is on display at the National Annie Oakley Center at Garst Museum in Ohio. Oakley had many custom-built firearms over her career, but the Winchester 1873 was a factory-made, smooth-bore rifle. It is important to note that both Annie and Buffalo Bill used smooth-bore rifles during their live shows for the safety of the audience. While this may make the shots seem easier, there’s only so much #7 chilled shot (1/2 ounce, to be exact) that can fit into a .44 caliber round. That creates one small, tight pattern. In empty arenas they both practiced and were successful with solid rifle ammunition.  While gunmakers pandered to Oakley, she remained steadfast in her belief that “the best gun is the gun that best fits the shooter.” She always argued against using “cheap” guns, but shunned brand loyalty and shot the guns she enjoyed: Parker, Remington, Lancaster, Winchester, Marlin, Stevens and Colt—just to name a few. 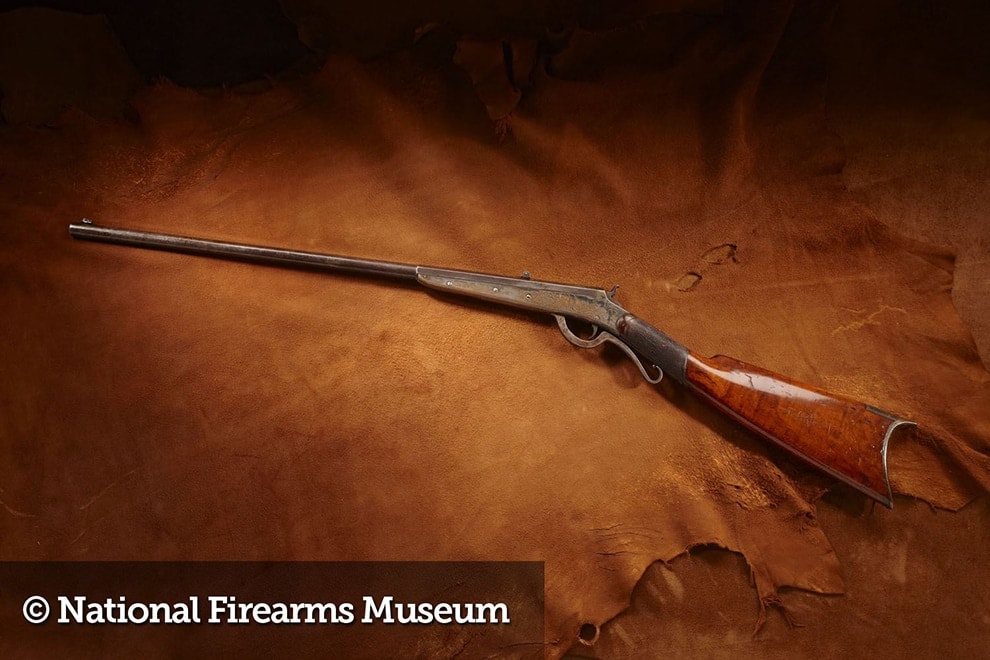 Annie Oakley’s Remington Beals .32 caliber rifle is a fine example of a rare, quality rifle with ties to arguably America’s greatest sharpshooter. Though unclear what role the Remington Beals played in her performances, experts assumed that she hunted with the gun and it remained in her personal collection. After her death the Remington Beals was one of the few guns retained by her family. According to NRA Museum documentation a relative sold the gun in the 1940s for the sum of $5. (Yes, you read that correctly. Five dollars.) While fewer than 800 Remington Beals were ever produced during the run of 1866-1868, Oakley’s was the most rare of all. It was the only known example to be factory engraved.

While the Remington Beals in the NRA Museum is perhaps one of Oakley’s most publicly viewed firearms today, she is also known to have loved her Stevens Tip Up and used it extensively for trick shooting. What has become of that gun is unknown.

Greater than Guns: An American Treasure

In a time when our right to bear arms is continually called into question, Annie Oakley stands as a reminder of all that is right with the world of firearms. Her life transcended firearms and trick shooting. She not only entertained and impressed audiences both here and abroad, but she lived and loved rightly, and she taught thousands of women how to shoot. All we can hope is that Annie Oakley, as both a legendary shooter and upstanding character, remains in the American consciousness for centuries to come.