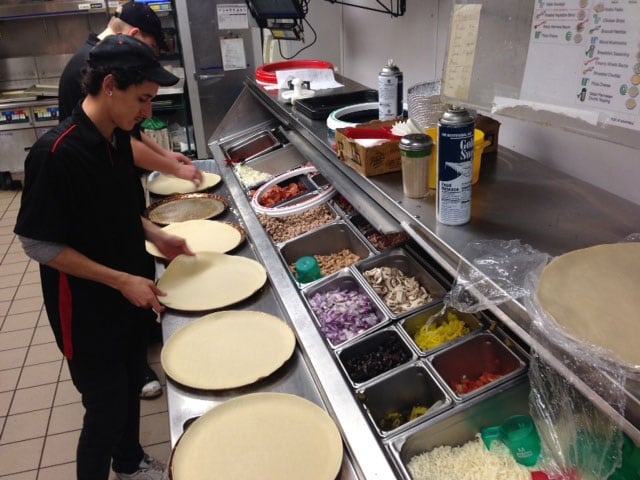 The pizza industry isn’t one that’s normally considered to be high-risk, but the number of delivery drivers being robbed seems to be increasing. (Photo credit: WISH TV)

Following two delivery drivers being killed in less than two weeks, Indianapolis pizza places are rethinking safety strategies for their drivers, but some, like Aunt Polly’s Pizza, are already allowing their drivers to pack heat along with pizzas and have been for some time now.

Manager of Aunt Polly’s told local media that the policy has been in place for years and that as long as the drivers have a valid concealed carry permit, they are fine with them carrying firearms.

Bill Bruton has a lifetime permit and said that he always carries a gun while making deliveries.

“It just kind of helps you even the odds up a little bit,” Bruton said, adding that even if you carry a gun, you still “got to be ultra-vigilant” because just carrying a gun won’t automatically keep you safe.

Bruton says drivers always have to be aware of their surroundings and any possible dangers lurking.

While not all of the pizza joints in Indianapolis allow their drivers to carry guns, they still try to emphasize safety.

“We’ve coached every store, every employee, on driver safety and different steps we can take internally to make sure our number one priority is the safety of our team members,” said James Hines, a spokesperson for Pizza Hut.

Some of those safety steps include making sure drivers lock their doors and carry no more than $20 in cash at a time. They also ask that customers leave a valid call-back number so drivers can confirm the order, as well as turn on porch lights to ensure that drivers are in a place where they can be seen by others.

Nonetheless, robberies of delivery drivers are becoming all too common – some ending in tragedy, others coming to an abrupt halt when would-be robbers are faced with an armed driver. And it’s occurring all over the country too, not just in Indianapolis.

Hal Perry was held up by three armed teens in Donora, Pennsylvania, while making a weeknight delivery back in November.

“I went to an address that looked legitimate to me,” Perry said following the incident. “I got out of the vehicle, and three of them came around the corner. One of them walked behind me and I knew something was wrong.”

But the trio scattered when Perry pulled out his pistol, the first time in the six and a half years he had been carrying a gun while delivering pizzas. Other than a box of chicken wings, the teens took off empty handed.

A short time later officers apprehended two of the teens when they found them sitting on a nearby street corner chowing down on the chicken wings. Authorities also discovered that the gun used to hold up Perry was a pellet gun.

In October, another delivery driver, who wanted to remain anonymous, shot and killed a would-be robber in Redford Township, Michigan. The driver had pulled up to a house for what he also thought was a legitimate order, but before he could even get out of his car, a man put a gun to his head and demanded money.

The driver was able to retrieve his own gun, which he used to fatally shoot the suspect, as an accomplice sped away from the scene in another vehicle.

Another would-be robber was fatally shot in August by a Domino’s Pizza delivery driver in West Melbourne, Florida. Bryon Park was sitting in his car after just completing a delivery when he was approached by the suspect, who was armed with a large knife and demanded money. Park, fearing for his own life, shot and killed the suspect, who was later discovered to have an extensive and violent criminal history.

The problem has gotten so bad in some areas that some businesses, such as Jets Pizza in Dearborn just outside of Detroit, have actually had to cut their hours and take other measures to ensure their employees’ safety comes above profits.

Jets already had what some would consider to be an extreme policy. The company would send two drivers out on each delivery – one legally armed with a gun. But on a summer night in 2012, they received their last call for the night when all of the drivers except one, a 19-year-old, had gone home.

The teen boy, thinking it was just a single delivery and nothing would happen to him, agreed to take the order. He was robbed at gunpoint and shot in the chest for $35.

Miraculously, he survived, but the company instated a new policy following the incident that deliveries would no longer be made to the Detroit area after dark.