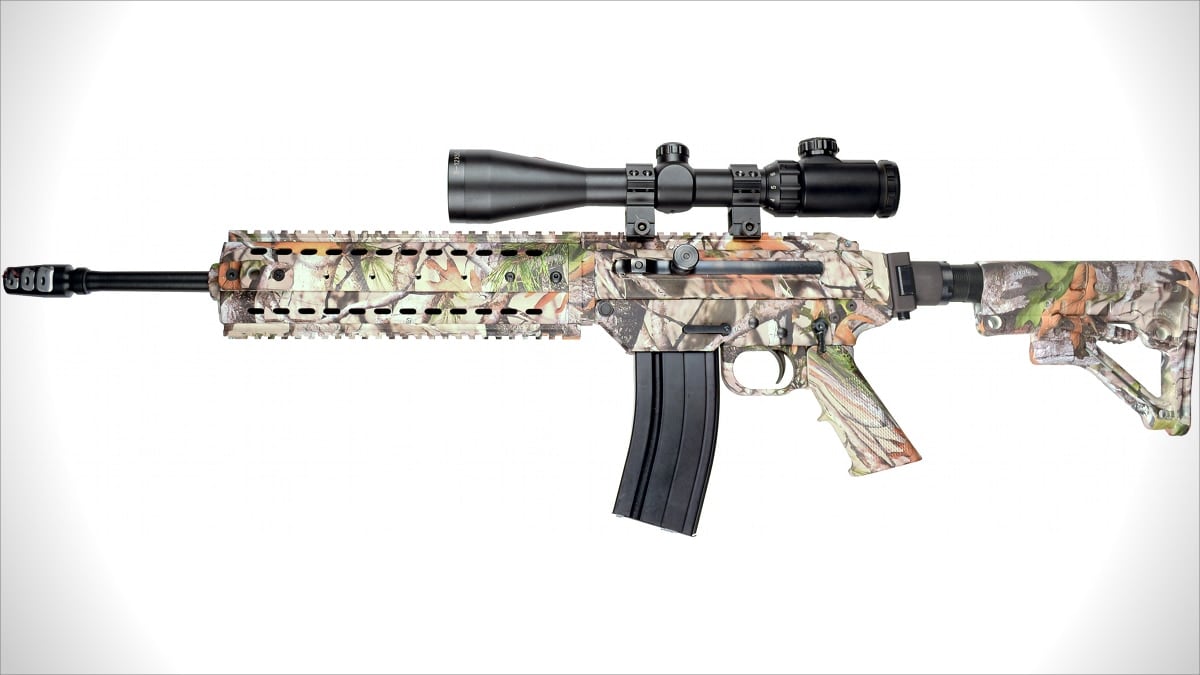 MasterPiece Arms is continuing the development of their new and original MPAR series of rifles with the latest edition chambered for 6.8mm Remington SPC. A capable hunting cartridge, the rifle is finished to suit with a Vista Camo hydrographic pattern.

The company plans to introduce more 6.8 SPC MPAR rifles in the future with ATACS camo and matte black finishes, as they have done with their MPAR 5.56 rifles.

Like the other MPAR rifles, it is a carbine with a 16-inch barrel, adjustable telescopic, folding buttstock, modular free-floating handguard and short-stroke gas piston operating system. The hand guard has fixed Picatinny rails on the top and bottom but can be adjusted to suit the user’s needs with optional side rails. By default the hand guard is fit with quick-detach sling points on both side to match the QD sling points on the stock.

One change with the MPAR 6.8 is that the barrel sports a new, three-baffle muzzle brake instead of an A2-style flash hider. This will no doubt mitigate the increased recoil of the harder-hitting 6.8 SPC cartridge.

At first blush many might assume that the MPAR is an AR-15-based rifle but in truth it has very little to do with the design, having more in common with the AR-18 and Daewoo K2.

The MPAR has steel receivers with a phosphate finish, not anodized aluminum, a non-reciprocating side charging handle that doubles as a forward assist if necessary and a bufferless recoil system.

With the recoil system self-contained in the hand guard and upper receiver, the MPAR doesn’t require a buffer assembly and uses a folding stock instead. It can be fired with the stock folded. The stock, like the pistol grip and magazine well, are compatible with AR-15 parts.

Unlike many piston-driven rifles, the flattop upper is the same height above the cheek weld as it would be on an AR rifle, so standard AR sights and optics will work with the MPAR without adjustment. It is “optics-ready,” meaning it doesn’t come with any, although that is a personal choice anyway.

Another way the MPAR is different from many boutique piston-driven rifles is the price. It’s quite affordably priced right around $1,000 and the MPAR 6.8 doesn’t break the mold with its MSRP of $1,089. It is 100 percent made in the U.S.A. and comes with a no-hassle lifetime warranty.

The MPAR is easy on the wallet and features a design that can really soak up abuses. If you’re looking for an alternative to the hundreds of AR-15 rifles on the market but like the style and ease-of-use, be sure to check out the MPAR family, and if you’re into hunting or mid-range target shooting, you definitely want to take a look at the new MPAR 6.8.