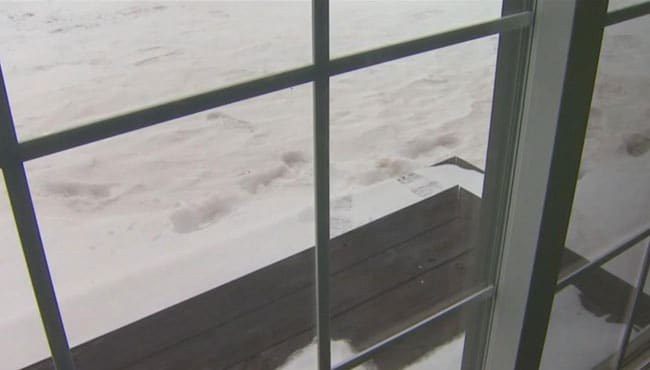 Footprints in the snow: A creepy reminder of the early-morning incident. (Photo credit: Wood TV 8)

When an Ionia County, Michigan, mother of two was awakened last Friday, upon hearing a strange noise around 1 a.m., she never expected to find a masked man with a machete tapping at her front door.

The woman, who did not wish to be identified, told reporters that she and her daughters were home alone when the terrifying ordeal occurred (her husband is deployed in Afghanistan).

As she made her way downstairs, she discovered a man wearing a ski mask and scratching the glass on her front door with a machete.

She immediately ran to her bedroom, grabbed her 9mm and called 911. It wasn’t until she was on the phone with the dispatcher that she realized the figure on the other side of the glass was also holding a shotgun.

The woman expressed her biggest fear in just a few words, “If he shot me and killed me, or if I shot him and he shot back – and I have two kids.”

“I felt like I was playing a game with him that he would step up closer to the door. I would raise the gun and he would step back,” she told reporters later that day.

The terrified mother stayed on the phone with the 911 dispatcher until police arrived a few minutes later, but even after officers were there, the suspect still wasn’t ready to back down.

“At first he hid behind a car, then there was a short foot chase where he finally threw down the weapon and we were able to take him into custody,” Ionia County Sheriff Dale Miller said.

Once he was in custody, officers removed the mask only to discover that, unbeknown to her, the suspect was the woman’s 15-year-old neighbor. The teen told the police that he was an “ordinance thief,” but they were unsure what he meant by that or what was the motivation behind his bizarre actions.

Hours later, as daylight broke, the eerie reminders of the early-morning incident could be seen: Scratch marks on the glass from the machete, remnants of the boy’s breathe on the window and footprints left by the boy in the fresh fallen snow all around the home and up onto the back porch.

The teen boy, whose name has been withheld due to his age, is being arraigned as an adult and now faces three felony charges.

It wasn’t until several days later that the boy’s mother stepped forward and told reporters that she believed her son was trying to get the police to shoot him because he wanted to die.

She explained that her son, who is autistic, was distraught over a recent breakup and that he had snuck out of the house that night without her knowing, also taking the 20 gauge shotgun which she had bought him for Christmas.

The teen’s mother said that he never intended to hurt anyone. He was heartbroken, only wanting to commit suicide by cop.

She was sorry for what he had done, the mother added, but was also grateful that the neighbor and police both showed restraint during the potentially tragic situation. She hopes her son can now get the help that he needs.

Although the neighbor never pulled the trigger, Miller said that had he stepped one foot inside the door, she likely would have been justified in doing so.

“It was a pretty tense situation,” Miller stated. “Someone is at your house at 2 in the morning with a machete and shotgun, he didn’t drop the weapons, and she had a handgun. It could have been a tragic situation.”