NY State Police on background checks for ammo: 'We're not ready to do it' (VIDEO) 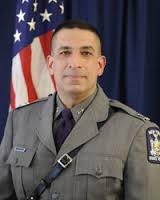 State Police Superintendent Joseph A. D’Amico said on Wednesday that due to complications in finding a technology that can efficiently run background checks for ammo purchasers, the mandate in the SAFE Act requiring such transactional oversight will remain unenforced for the foreseeable future.

“We’re not ready to do it,” D’Amico told lawmakers at a budget hearing for the start of the fiscal year, April 1. “When we are, we will give ample notice.”

D’Amico explained that whatever background check system the state eventually puts in place for ammunition purchases it must be “absolutely seamless” for both the ammo buyer and the retailer.

“It can’t bring the transaction to a halt,” D’Amico warned.

Under the SAFE Act, state law enforcement had the green light to begin enforcing background checks for ammo purchases on Jan. 15, 2014. However, that start date has come and gone because the department has not yet figured out a way to run the checks in a timely manner.

While some suggested that state police should just use the FBI’s National Instant Criminal Background Check System, federal law prohibits any state from using NICS for ammo purchases.

Another sticking point with respect to the background checks for ammo purchases is the fees that gun shop dealers and sporting good stores can charge for conducting the check, which is something that superintendent declined to address.

“I just think it’s premature to talk about the costs when we don’t have a solution,” D’Amico said.

Some gun owners speculate that retailers could charge as much as $10 per background check, as the Buffalo News reported.

In response to these latest hiccups, Tom King, President of the New York State Rifle and Pistol Association, suggested that this is just further proof that the law is not the “best bill” that Gov. Cuomo claimed it was upon ramming it through the Legislature a little over a year ago.

“It confirms our suspicions that this was an ill-conceived, hastily prepared and passed law with political expediency rather than the public good in sight,” King told Guns.com in an email.

Apart from the background checks for ammunition, D’Amico said that state police would not be enforcing the seven-round magazine limit that was imposed under the SAFE Act. Last month, a federal judge ruled that the provision was “tenuous, strained and unsupported.”

“There’s pending litigation which could change it,” D’Amico said of the magazine restriction and the judge’s ruling, which is likely to be appealed, “but as of today, we’re not enforcing it.”

To roll out the SAFE Act, D’Amico has hired 19 non-uniformed staff to help with ‘assault-weapon’ registration, background checks and other bureaucratic tasks the law requires. The cost of the extra help has come at a price tag of about $3.2 million, as The Post-Standard reported.