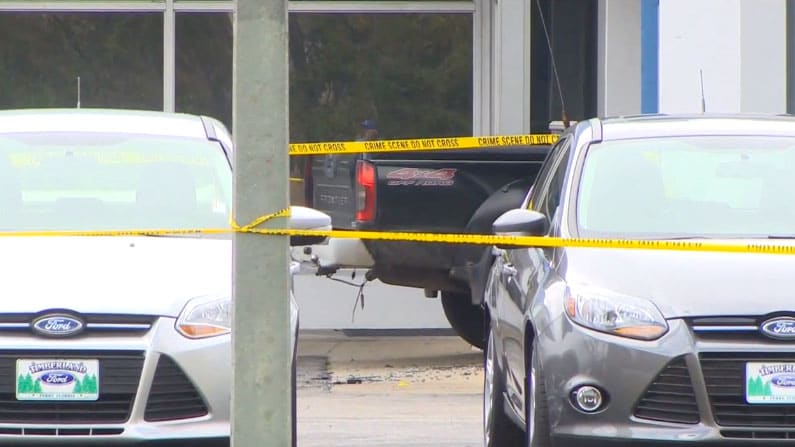 Earl Clauge apparently drove his truck into the front of the dealership before getting out with a fully loaded 12-gauge shotgun. (Photo credit: WCTV)

An armed deputy shot and killed a gunman as he opened fire on customers and employees at a car dealership in Perry, Florida, just after 10:30 Wednesday morning.

Taylor County Sheriff’s Deputy Robert Lundy was having his patrol car serviced when Earl Edward Clauge Jr., an employee at the dealership, drove his truck into the front of the business, got out of the vehicle and opened fire with a semi-automatic shotgun, the Florida Department of Law Enforcement said in a news release.

Clauge fired several rounds, hitting Lundy and two others, but Lundy returned fire, fatally striking the 51-year-old Clauge. Officers arrived on the scene in less than a minute after the first shot was fired.

The names of the other two gunshot victims have not been released, although authorities did confirm that they were employees at the dealership. They and Lundy, who underwent surgery but is said to be in stable yet critical condition, are all expected to survive.

Three others were also injured during the incident, but were not struck by gunfire. One was suffering from back pain, another was complaining of chest pains and the third received injuries from broken glass. It’s unknown at this point what caused their injuries, but none are considered life-threatening.

As Lundy recovers in the hospital, many are calling him, a 10-year veteran of the sheriff’s department, a hero.

“We know that his actions today saved the lives of many citizens,” Gretl Plessinger, spokeswoman for the Florida Department of Law Enforcement, said.

“We consider him a hero,” said Charlton Knowles, president of Buckeye Community Federal Credit Union, where a fund has been established for Lundy and his family. “There could have been other victims had he not taken the action that he did. We’re very proud of him.”

“I think it’s awesome that he was here… it’s kind of like God put him here for a reason to be at that place at that time,” Perry resident Nancy Dowling said. “He just did what he thought was best, which was good because there was so many people that worked in the dealership that if he hadn’t had stopped him, you don’t know who would have.”

In the days following the shocking incident, authorities have yet to come up with a clear motive, but Special Agent Don Ladner with the Florida Department of Law Enforcement said that they feel “confident that his intent was to shoot and hurt as many people as possible.”

Ladner revealed that Clauge was not only armed with the 12-gauge shotgun he held as he exited his vehicle, he also had a second 12-gauge in his truck and a .22-caliber rifle, both of which were fully loaded. He also had several boxes of extra ammunition as well as loose shotgun shells.

Clauge worked at the dealership for nearly 20 years. Although several years ago he was let go briefly over some “issues” on which Ladner did not elaborate. However, at the time of the shooting there were no known problems at the dealership. 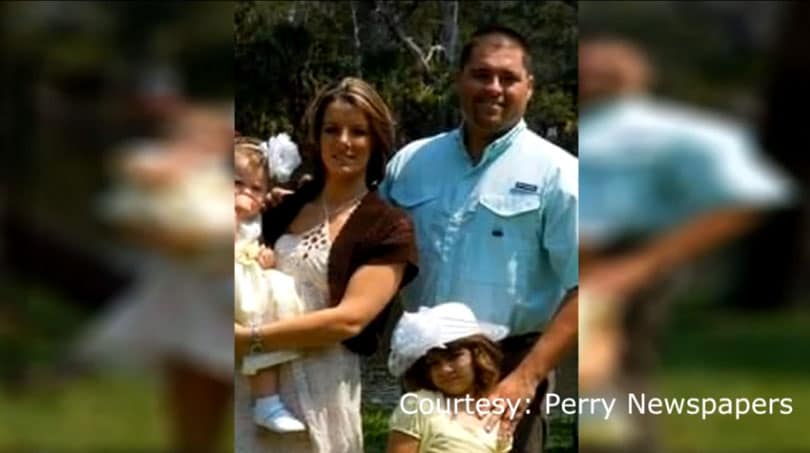 Deputy Lundy’s family has not yet spoken with anyone from the media. (Photo credit: Perry Newspapers)

“He just called in and said, not feeling well, won’t be in today. There were no issues at the time. Shortly thereafter, he drove his truck through and the shooting began,” Ladner explained.

For those who knew Clauge, the news of the shooting was shocking.

“It’s just an amazing shock because he was always a quiet individual,” said Perry resident Jerry Mathews, who went to high school with Clauge and had dealt with him a few months prior while finding parts for his truck.

“I just have prayers for both sides of the family and ask the Lord to put his hand around them and take care of them,” said Mathews.

Clauge’s family has not spoken with anyone from the media.

Authorities continue to look for motive as the investigation continues.