The teenager who rappelled into a San Francisco car dealership and stole Chef Guy Fieri’s Lamborghini in 2011 a was recently given a life sentence for attempted murder.

Max Wade was 16-years-old when he dropped out of Redwood High School and meticulously planned a sophisticated car heist. On March 8, 2011, he successfully stole Fieri’s yellow Lamborghini and after having his heart broken by his crush, Wade set out on April 13, 2012 to commit his next major crime – attempted murder, ABC reports.

Wade’s computer history showed he first researched and learned the necessary skills to pull off his heist. Lock picking, “mission impossible-style rappelling,” how to jam a “Lojack.” Wade was ready. He rappelled into the dealership and after nearly 15 minutes, drove off with a boosted Lamborghini. 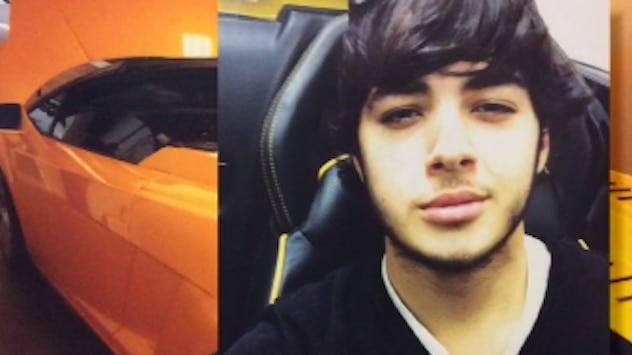 Wade posted photos of the himself sitting in the stolen Lamborghini.

“It’s amazing, he’s obviously very intelligent and some of his stuff was the work of a very sophisticated criminal,” said Greg Garrett, who worked the case for the Marin County Sheriff’s Office. “Other things seem like they were teenage fantasy.”

But it was Wade’s infatuation with 17-year-old Eva Dedier that eventually led to his arrest. After finding out she was spending Valentine’s Day with a schoolmate from his old high school, Wade ambushed the couple. He pulled his motorcycle alongside their truck and fired five rounds at them. Later, he offered to pick Dedier up in his Lamborghini and when he went to his storage container where it was hidden, the cops nabbed him.

“And we’re very close… one of the narcotics guys gets close enough to kick him in the upper chest and knock him to the ground,” Garrett said. “He had a loaded Glock .45 with approximately 50 rounds of ammunition in separate magazines.”

Inside Wade’s storage container, police discovered the Lamborghini, the motorcycle used in the drive-by, guns, and plans to commit other crimes.