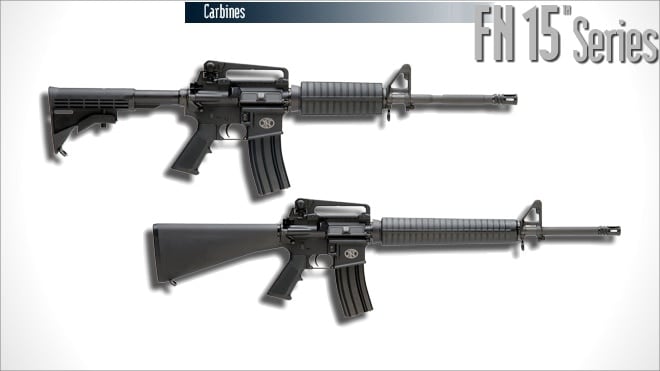 FNH-USA is finally making AR-type rifles for the commercial market, after manufacturing them for more than 20 years for the military. This follows FN’s recent contract to take over manufacture of the M4 carbine for the U.S. Army from Colt.

The company is launching with two rifles in the style of the M16 and M4, the FN-15 Rifle and FN-15 Carbine, respectively.

“New in 2014 from FN-USA we have the FN-15 line of rifles and carbines,” explained FN’s in-house firearms instructor and former Marine Ben Voss. Any fan of the AR platform’s going to recognize the M4 pattern of the FN-15 carbine and the M16A3 patter of the FN-15 rifle. Both FN-15s carry the same basic operating group, are gas-impingement-style AR-15 rifles, forged aluminum upper and lower … the button-broached chrome-lined barrel, made at our manufacturing plant in Colombia, S.C.”

Naturally the rifles also include M4 feed ramps and barrel extensions and they will ship with 30-round USGI-type magazines where available.

While they may not have the military fire control groups, FN is going the extra distance on the commercial front to make certain that the FN-15s stand out.

“The difference of an FN-15 over the other AR-15s in this very crowded market is going to be the quality that goes into every FN-15 that is signified by the FN logo, added Voss. “The FN barrel is known to be, in the military business, the most high-quality, high-use, most durable barrel. We use that information, that technology, to put on our FN-15 rifles.”

One of the small, but very welcome touches is that FN will be fitting and color-matching the receivers before they leave the factory. Some color differences can occur during the hard-anodization process and FN only pairs matching receivers when building their rifles.

FN is launching with these two standard, even common configurations to give people the option of buying the commercial equivalent of the firearms they make for the military. Down the road, they do expect to follow through with other designs and styles.

One thing is certain, FN is set on using their military pedigree to take advantage of the AR market. Previously Colt was alone in being able to tie their commercial product to the U.S. military. Now FN is moving in on that action.

For more details and specifications about the new FN-15 rifles head over to their product page.