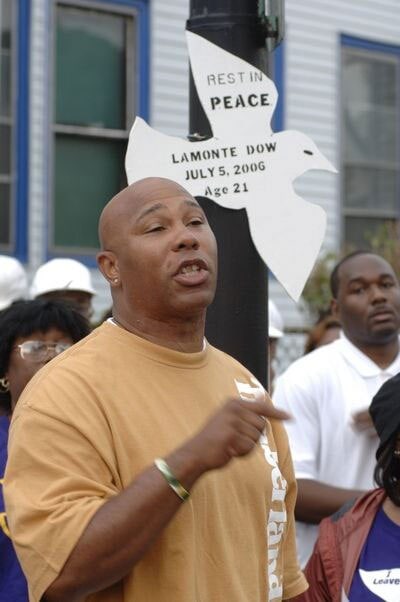 Well-known gun control advocate and supporter of the NY SAFE Act, Dwayne Ferguson, was arrested Thursday afternoon in Buffalo, New York and now faces two felony charges after authorities discovered that he was carrying a loaded handgun on school property.

Authorities received an anonymous 911 call at about 4:15 p.m, local media reported. The caller claimed that a man with a gun had been seen either in or around Harvey Austin Elementary School in Buffalo.

The call led to a lockdown that lasted several hours and initiated a response from every law enforcement agency in the district, including the SWAT team, K-9 units and the Erie County Sheriff’s Air One helicopter. About 60 students were held in the school’s cafeteria while officers did an initial search of the school.

No gunman was found, so authorities did a second, more thorough room-to-room search, as students were individually checked for weapons as they were loaded up onto school busses to be transferred to another school. Once the all clear was given, officer individually reunited students with their parents more than three hours after the initial 911 call.

It was during the second search that authorities discovered Ferguson was carrying a loaded handgun. Although he has a valid permit to carry legally, the SAFE Act, which Ferguson whole-heartedly supported, made it a felony to carry a firearm onto school property.

Ferguson was arrested and charged with two counts of criminal possession of a weapon, including having a loaded firearm on school grounds. Both of which are felonies. If convicted, he could face up to four years in prison, but he plead not guilty to the charges on Friday.

Prosecutors originally wanted to set bail at $10,000. However, recognizing his involvement in the community and the fact that he had no prior criminal record, the judge released Ferguson with the stipulation that he turn over all of his weapons to the courts and stay away from the school until the case is closed.

Ferguson, who is in the printing industry and does part-time security, is not an employee of the school district, but is involved in after school programs as a sort of mentoring program with the students. He has been actively involved in community outreach programs for more than 10 years and is currently the president of MAD DADS, an organization which works with at-risk youth.

Ironically, it’s the same legislation that Ferguson supported that, at least in part, landed him in hot water. In fact, back in March at a rally in support of the NY SAFE Act, he admitted that he didn’t think the legislation went far enough.

“Our kids are not buying assault weapons, they’re buying pistols and they’re buying them right out of community stores and back here in the school. So this is serious. It needs to go further than what it is,” he said at the rally.

Nonetheless, officers as well as Ferguson’s associates believe that he did not have ill intentions when he brought the gun to school with him and that it was simply an honest mistake.

“I’m sure Dwayne went into the school not thinking he had the gun on him,” said Rev. James E. Giles, a member, along with Ferguson, of the anti-violence coalition Buffalo Peacemakers and president of Back to Basics Outreach Ministries. “We know this for a fact, that he called out to a Buffalo police lieutenant asking why the school was in lockdown, and that they were looking for a man with a gun.”

“Mental lapses happen. Things happen. It’s an unfortunate mistake. Dwayne was not conscious that he was in school with a gun,” Giles added.

George Johnson, president of Buffalo United Front and friend of Ferguson, pointed out that had there been an actual gunman at the school, Ferguson could have been a valuable asset to law enforcement, contradicting the very idea of gun-free school zones which they advocate.

“Dwayne probably was in a position to help the police not knowing that he was the one they were looking for,” Johnson said.

But School Superintendent Kevin Brinkworth balked at the fact that Ferguson never informed officers that he was carrying the holstered weapon.

“He had opportunities,” Brinkworth said, also adding that he too believed there was no ill intention on Ferguson’s part.

Superintendent Pamela Brown released a statement following the incident stating, in part, “I understand our parents’ concerns, and I express my deepest apologies for the anxiety they have experienced. I also apologize for the interruption of the students’ after school activities, while I commend them for following the instructions provided by our trained staff. Due to laws that are in place, and whether this was an intentional act or an oversight on the part of the individual in question, this is now a police matter.”