Hundreds of people showed up on Saturday in Miami Gardens to remember Trayvon Martin, the Florida teen who was fatally shot by a neighborhood watch volunteer on Feb. 26, 2012 while walking home from a convenience store.

Among those in attendance was Oscar-winning actor Jamie Foxx, who help lead the peace walk through the suburban streets and into the Betty T. Ferguson Recreational Complex where the rally was held.

In addressing the crowd, Foxx talked about the importance of being a responsible parent and gun owner.

“What we are all supposed to do is protect our kids no matter what. We’re in a culture where things are sort of getting out of control…” said Foxx, who is both a father and a gun owner.

Foxx also seemingly chastised the youth of the black community for not taking a more active role in curbing gun-related violence, as WebProNews reports.

“The blood that flows through America that is from gun violence is mostly African-American, and yet you young black folk sit here mute and ya’ll don’t say nothing about it,” Foxx exclaimed.

No doubt a powerful message coming from what many consider to be a role model and an icon. 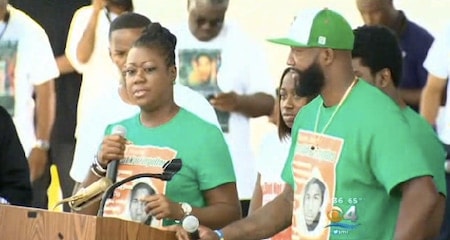 Though, the event wasn’t just about responsible gun ownership, good parenting and remembering Travyon, there was also a political appeal to the rally.

Specifically, Miami-Dade County Commissioner Barbara Jordan called for the repeal of the state’s controversial ‘Stand Your Ground’ law, which was spotlighted during the trial of George Zimmerman, the man responsible for killing Martin after the two engaged in a physical altercation inside a gated community in Sanford, Florida.

“We have to make sure we get rid of the Stand Your Ground legislation because it’s being used to legally kill our children,” said Jordan.

“These senseless crimes that are being committed in the area need to stop,” Jordan added.

While SYG was not explicitly mention during the proceedings — Zimmerman’s attorney argued that it was a case of common law self-defense — the jury was given the text of the law prior to acquitting Zimmerman of second-degree murder in the shooting death of the 17 year old.

Many gun-control advocates and Trayvon supporters argue that SYG creates a vigilante mindset, a “kill at will” or “shoot-first” mentality in gun owners.

However, establishing a casual link between SYG and crime rates has remained troublesome for gun-control advocates, as overall violent crime has actually decreased since the law’s adoption in 2005.