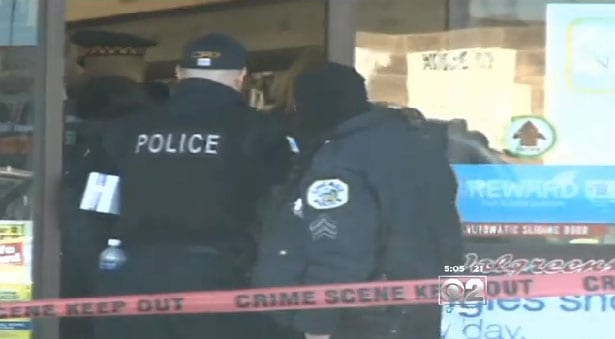 Authorities said the officer had no choice when he shot the suspect, as he feared for his life. (Photo credit: CBS)

A robbery in progress at a Walgreens in Chicago’s Jefferson Park last Monday ended abruptly when an off-duty cop happened to be at the store, according to a local CBS affiliate.

The officer, whose name has not been publicly released, pulled up to use the ATM outside of the store around 10:30 a.m. When he looked into the window, he saw the cashier frantically stuffing money into a bag and knew that something was wrong.

As his wife and two children sat in the car outside, the officer walked inside to find 56-year-old Mark Garcia in the middle of robbing the store.

“He pulls his weapon out, walks over, ‘Chicago police get down on your knees.’ The guy looks at him, drops down to his knees,” said Fraternal Order of Police spokesperson Pat Camden.

The officer said he could see that Garcia had a gun in his pocket as he dropped to his knees. But although he seemed to cooperate at first, he wasn’t ready to go to jail.

“The guy looks up at him and says, ‘I’m not going in. You’re going to have to shoot me,’ starts reaching into his pocket for the handgun,” Camden explained.

At that point the officer, fearing for his own safety, fired a shot, striking Garcia once in the chest. He was taken to a hospital where he died just after 1:00 later that afternoon.

Police recovered a semi-automatic handgun from the scene, believed to be Garcia’s.

Authorities are looking into the possibility that Garcia may have been responsible for a previous robbery at the same store last month, as well as other robberies at a nearby Dollar Tree and Dunkin Donuts.

The officer has been with the police department for 11 years and is currently assigned to the Near West District.