When I learned that I would be accompanying the rag-tag bunch of heroes here at Guns.com to SHOT Show 2014 I was as giddy as a child en route to Disney World. The excitement quickly died down when I learned my first editorial would be the industry trends article you’re now perusing.

SHOT is enormous. It’s one thing to see a couple of cool products and write blurb’s about them, but it’s something entirely different to complete a puzzle with a few pieces. Thankfully, I’m decent at noticing patterns and three in particular struck me from day one as up and coming trends: collapsible stocks, sound suppressors and KeyMod rails. None of these products are bleeding edge but their application this year was astounding. 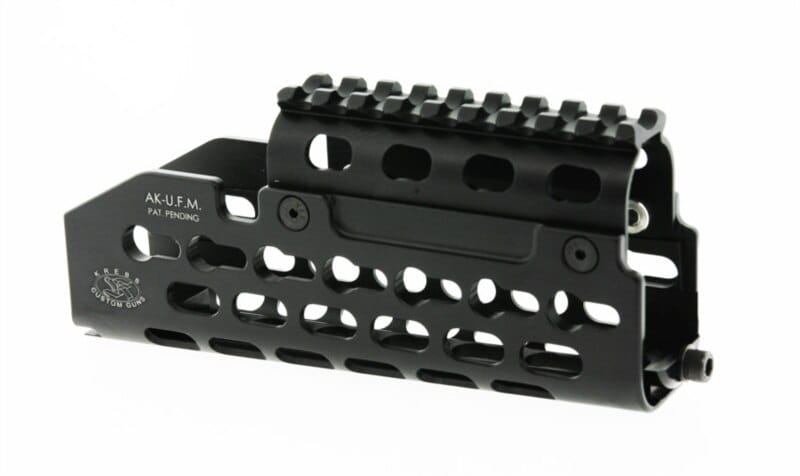 You know Keymod rails have arrived when you see them on AKM’s (Photo credit: Krebscustom.com)

These handy Picatinny rail alternatives give the DIY gun crowd what they’ve always wanted without the limitations of the current rail mounts: rail real estate without dramatically shifting the weapon’s balance. They are lightweight, comfortable and allow the shooter to place rails only where he/she wants them.

We started seeing KeyMods a few shows ago, but this year they were on everything. Every major AR-15 manufacturer had KeyMod rails on their newest offerings (Krebs even had them on their AK rifles). While my ultra limited dozen guys-at-my-local-range sample group hasn’t adopted them yet, it would not surprise me if KeyMod became the new gold standard for railed platforms. 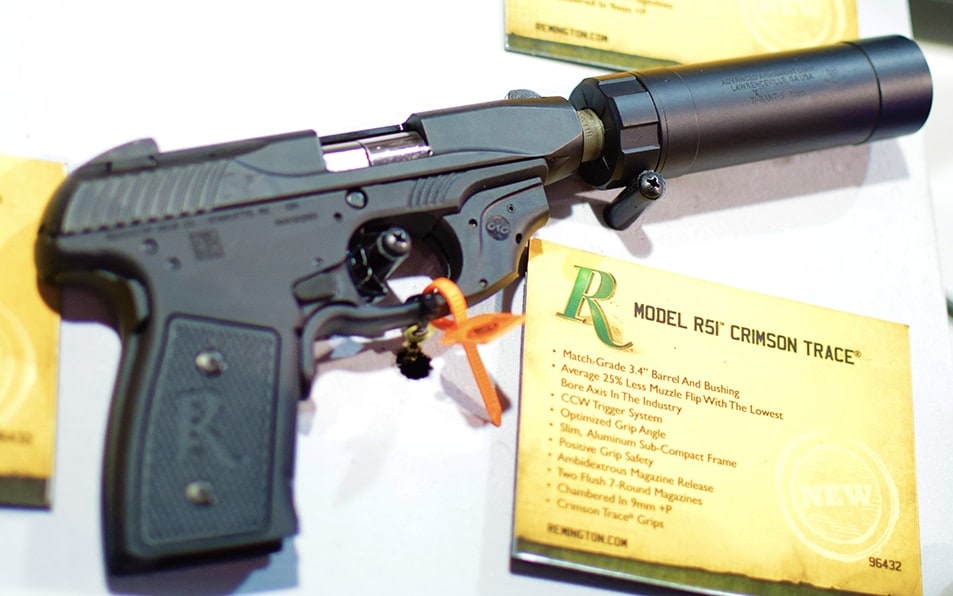 Suppressors are showing up on CCW pistols, glorious. (Photo by Jim Grant)

We touched on this last year with our trends article focusing on the increase of guns with threaded barrels at SHOT 2013. This trend shows no signs of slowing, thanks in no small part to Silencerco’s “Silencers are Legal” marketing campaign. Suppressors are one of the fastest growing portions of the firearms market and it shows. SIG Sauer introduced some last year, and Colt Manufacturing is offering their own silencers on the civilian market for the first time this year.

People who are wondering if the exploding market for sound suppressors is a passing fad should rest easy with Colt in the fray. Colt is a conservative company and rarely jumps on trends until the market has stabilized. Also, SIG, which tends to be more market aggressive, is to releasing their MPX line of pistol caliber carbines designed  with suppressors in mind. It seems that the market is already preparing itself.

Even LWRC is getting in on the compact stock action. (Photo by Jim Grant)

These have been around for a very long time, but on the AR platform the variety is very limited, especially if you wanted to stay with direct impingement system. LWRC, Troy and SIG all released MP5-style collapsible stocks for their respective AR series of rifles. If you’re familiar with how AR rifles function, “how” should be the next word out of your mouth. Since the AR platform uses a buffer tube and spring approximately two-thirds of the stocks length, a flush-fitting collapsable stock similar to an MP5’s shouldn’t be possible. With a traditional buffer tube it isn’t.

The SIG MPX gets around this by using a simple blowback mechanism, where the recoil assembly resides inside the receiver. LWRC and Troy Industries have a different approach. They utilize the North Eastern Arms Group’s Compact Carbine Stock System. NEAG released their CCS last year in Canada and while it impressed them, the Canadian gun market is a fraction the size of the U.S. one. Thankfully, several large U.S. arms makers have taken it upon themselves to bring this ultra compact stocks to the good ol’ US of A. Helping negate one of the least mentioned shortcomings of the AR platform: its fixed length.

The end-game of all this ergonomic design? SIG’s compact, soft-shooting quiet carbine, the MPX (Photo by Jim Grant)

Shorter stocks, lighter more versatile accessory mounting options and sound suppressors are driving the market in a politically sensitive direction. While guns will be a political issue for the foreseeable future, all of these trends are pointing gun owners towards the end game of the ultimate home defense weapon. One that is lightweight, compact, fully customizable and hearing safe indoors. Rarely in any market has growth been so ergonomic driven. Although, in no other field are ergonomics federally regulated.