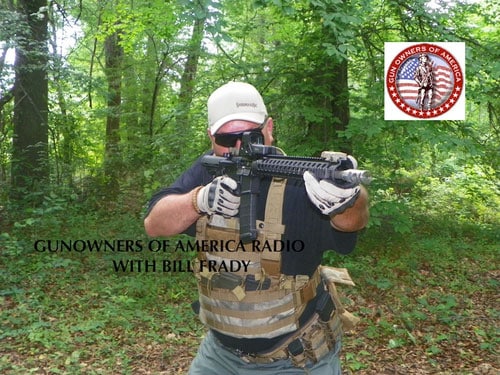 Guns.com had the privilege of joining Bill Frady for an hour-long segment on Lock N Load Radio Tuesday morning to discuss a few hot topics like defensive gun use, kids and guns, armed teachers and toy guns.

It was my first “public appearance” of any sort and I’ll readily admit that I was nervous. However, I honestly couldn’t have asked for a better experience – even with a quivering voice and saying “umm” a few times too many as I struggled to get the words from my brain to my mouth.

The radio program is presented by Gun Owners of America and, according to the website, is a “blunt object broadcast that attempts to reach out to Americans and explain the difference between engaging and spectating” and “calls out, points out and attacks everything that comes after our liberty.”

Bill Frady is a “staunch 2nd Amendment supporter with a deep seeded belief in America and the American People,” as well as a husband, father, grandfather and military vet – still believing in his oath of service – who lives in South Carolina.

After introducing our website and what we do, Mr. Frady and I dove right into my specialty, the topic which launched my career as a writer in the gun world – defensive gun uses. Of course, as we discussed, the one or two defensive gun use pieces that are published on Guns.com daily doesn’t even begin to make a dent in the estimated 500,000 to 3 million defensive gun uses each year in the U.S.

We talked about the importance of self-defense as an individual responsibility and the need to be prepared ahead of time for a potentially life-threatening situation before it ever even happens. I likened it to children participating in tornado drills at school – you do them hoping that an actual tornado never happens, but preparing just in case.

We also explored part of my own personal journey in coming to the realization that I needed to be responsible for my own safety, rather than simply depending on my husband like I had always done in the past. Although this realization occurred some time before I started writing for a pro-gun publication, it was one of those things which became part of the driving force behind my passion for defensive gun use. And every single time I read or write about a mom defending herself and her children from a potentially tragic situation, this belief is only reinforced for me.

Mr. Frady also pointed out the fear that a criminal must feel when he turns to the seemingly defenseless or thought to be weaker woman, only to realize that she’s packing heat, a situation which seems to be increasingly common. 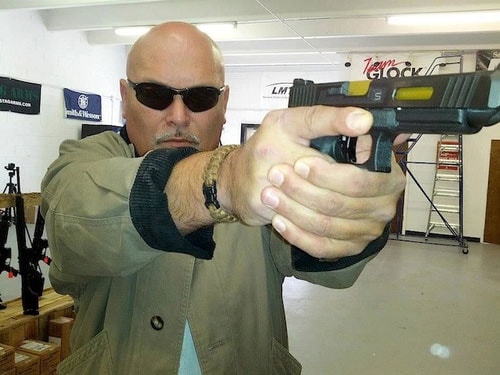 Mr. Frady may look tough, but he really is a nice, easy-going kind of guy. (Photo credit: Bill Frady)

The discussion then led into the whole issue surrounding children and guns and ABC’s 20/20 piece “Young Guns,” which aimed to show that children are attracted to firearms, even when taught safety. As I said on the program, I understand the point they were trying to make, but I felt it was a bit on the biased side and had more of a set-up kind of feel to it than a realistic type situation which a child is more likely to encounter. Mr. Frady agreed.

We talked about children becoming violent and whether or not guns had an impact on such behavior. There’s a very distinct difference in exposing children to guns, which is just an inanimate object, and exposing them to actual violence. While I am against violence, I also don’t hold the belief that guns themselves are a source of violence.

We further explored the theme of children and guns, particularly toy guns and the “no tolerance” attitude that seems to be running rampant and essentially punishing kids – mostly boys – for being… well, boys.

Mr. Frady pointed out the difference in the attitudes and entertainment of today versus when he was a boy. “The good guys always stopped the bad guys with guns,” he said, explaining that when he played as a child with his “arsenal” of toy guns, he was pretending to be the good guy catching the bad guy, not some gang member randomly murdering people. “I was thinking this is just like the Lone Ranger,” he added, referring to his childhood memories.

Guns in schools and arming teachers was another hot topic that we were able to touch upon, comparing the difference in having armed guards versus teachers and other staff being armed.

I then had the opportunity to chat with a couple of members of the audience who called in at the end of the segment. Both callers reiterated the importance of safety and continuing education as discussed earlier in the show.

Mr. Frady wrapped up the hour by telling his audience that I would be returning to the show for further discussions. So I guess that means that my initial nervousness didn’t stand in the way of a useful conversation, which as he points out is the really the key to helping educate others.