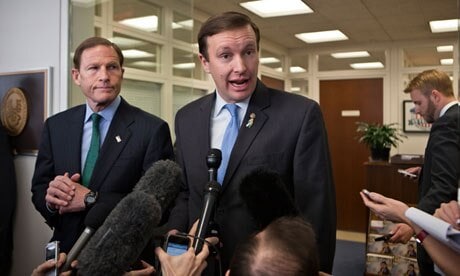 Sen. Chris Murphy (D-CT) has attended two public gun-control events in the past week, calling for “Congress to wake up and do the right thing.” (Photo credit: AP)

In recent weeks, Congressional members in both the U.S. House and Senate have made public statements and resolutions calling for increased gun control laws. This comes after a year of several hard defeats for such measures in Washington and waning public support for more.

Sen. Chris Murphy (D-CT) and Rep. Carolyn McCarthy (D-NY) were in attendance of the joint release of the Moms Demand Action and Mayors Against Illegal Guns study on school shootings since Newtown Wednesday.

At the event, McCarthy told reporters, “We don’t have to choose between protecting the Second Amendment and installing some sensible safety measures that keep guns out of the wrong hands.”

Murphy said in part, “We can do more to prevent these tragedies and it’s time for Congress to wake up and do the right thing.”

This event came just days after Murphy and fellow Connecticut Sen. Richard Blumenthal spoke out against gun violence in their home state.

There, even though Senate Majority Leader Harry Reid said that he would not revisit a gun control bill until he has the 60 votes needed to pass one through that body, Blumenthal, threatened more legislative action.

“We’re not giving up,” Blumenthal said. “We’re not going away. The Connecticut effect will be enduring.” 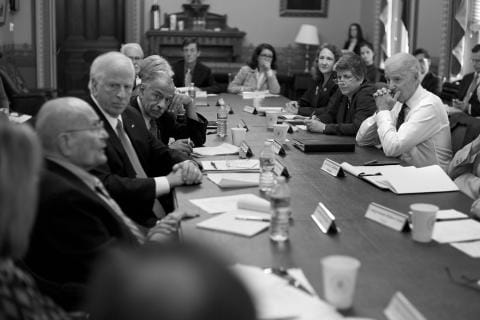 Resolution HR468 is a non-binding bill that describes gun violence as a public health issue. It asks that Congress treat it by passing legislation that would expand background checks for all commercial gun sales, improves the mental health system in the U.S., and makes gun trafficking and straw purchasing a Federal crime.

Rep. Alan Lowenthal (D-CA), along with co-sponsors by Rep. Mike Thompson (D-CA) and Elizabeth Esty (D-CT), entered the bill into the record two weeks ago.

All three representatives sit on the Gun Violence Prevention Task Force, a group formed by the White House after the Sandy Hook Elementary School shooting. This group produced a number of proposals in 2013.

However, pro-gun groups were not impressed by the resolutions and rhetoric. The National Shooting Sports Foundation, the gun industry lobby group, addressed last weekend’s public meeting, calling it a “ruse” with a purpose of pushing more gun control laws by the anti-gun crowd.

“When most people talk about public health issues, things like cancer, diabetes, and other diseases are some of the topics most often addressed,” the NSSF said in the statement. “When Senators Chris Murphy and Richard Blumenthal, the most liberal and 5th most liberal senators in the U.S. Senate, respectively, talk about public health issues, gun ownership trumps all others as the #1 issue.”

Nationally the public’s mood for gun control legislation seems to have cooled. A recent Gallup poll found that 55 percent of Americans said they were not pleased with current gun laws, the highest since 2001 and that the numbers who felt the laws were too strict has tripled since 2013.