Man on trial for shooting unarmed black teen: 'You're not going to kill me, you son of a bitch' (VIDEO)

In a testimony freighted with emotion, Michael David Dunn told a jury on Tuesday that he feared for his life before he fatally shot an unarmed black teenager at a Jacksonville, Florida, gas station in November 2012.

Dunn, who is facing a first-degree murder charge for killing 17-year-old Jordan Davis, testified that a dispute over the teen’s loud music playing in an SUV reached a point where Dunn had to use deadly force.

“Jordan Davis kept escalating this until the point I had no choice,” said Dunn, a concealed carry permit holder. “It was life and death.”

Dunn claimed that before he fired nine times into the Dodge Durango, killing Davis, either Davis or one of his friends in the SUV pointed the barrel of a shotgun at him.

“I thought I was going to be killed,” Dunn said, implying that it was a simple matter of self-defense.

However, authorities found no firearm in the SUV following an investigation into the shooting.

On the stand, Dunn talked about the events that led him to open fire on the teens, starting with the music. 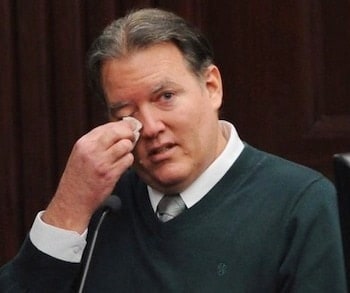 Michael Dunn, getting emotional while testifying before the jury that will decide his fate. (Photo credit: AP)

“It got really loud,” Dunn said. “My rear view mirror was shaking. My eardrums were vibrating. It was ridiculously loud.”

Dunn said he was confused and asked the passenger if the teen was talking to him. Soon after, Dunn alleges that the passenger picked up a shotgun and “slammed it against the door … and said, ‘Yeah, I’m going to f****** kill you.'”

After a few more verbal threats, Dunn testified that he feared for his life, pulled his pistol out of his glove box and said, “You’re not going to kill me, you son of a bitch.”

He then fired into the red Durango, killing Davis.

In addition to the first-degree murder charge, Dunn is also facing three counts of attempted murder for the other teens that were in the SUV, but survived the shooting: Leland Brunson, Tommie Stornes and Tevin Thompson.

He has entered a plea of “not-guilty” to all the charges.