I hate 1911 pistols. It’s true. I own three and all of them have ruined my life.

It was a brisk Sunday morning in September and I was taking a walk with my future wife along the storefronts of Plymouth, Massachusetts. At that time I owned a single rifle, a Yugoslavian M48 Mauser in 8mm. I am a huge history buff and bought my rifle solely based on its historical significance. In fact, I hadn’t even fathomed the possibility of a CCW, until I spoke to my town’s chief about getting an FID gun license.

See, Mass is a “may-issue” state where issuing a gun license is at the discretion of the issuing officer. In other words, if the cop doesn’t like the way you look, he can tell you to pound sand with no burden of proof.

As a lad freshly-turned 21, folks in the know told me that I would have to apply for an FID first, which only allows ownership of low-capacity rifles, wait 3 to 5 years, and then apply for an LTC-A license. The LTC-A allows holders to not only purchase pre ban high-capacity pistols and rifles, but also carry a handgun for self defense. Some town’s chiefs would never issue LTC-As, so you didn’t want to piss him off by asking, thus ruining your chances at obtaining a FID and destroying any chance of firearms ownership.

When I went to see the officer in charge at my local precinct to inquire about an FID, I was pleasantly surprised, then mortified. He was a family friend that my parents had known for years. The combination of my parents being staunchly anti-gun, me living under their roof while I was looking for a full-time job and not letting them know of my intentions of firearms ownership, made me quite nervous.

After talking a few minutes I told the issuing officer my objective to be a gun collector and he replied with, “Why don’t you get an LTC-A? The training requirements are the same and you can get whatever you want.”

The results were beyond my wildest expectations. Not only could I buy the Mauser of my dreams, but I could buy all sorts of things. Trying not to seem suspiciously surprised, I profoundly muttered, “Yeah…uh…sure.”

Back to that sunny day in Plymouth. 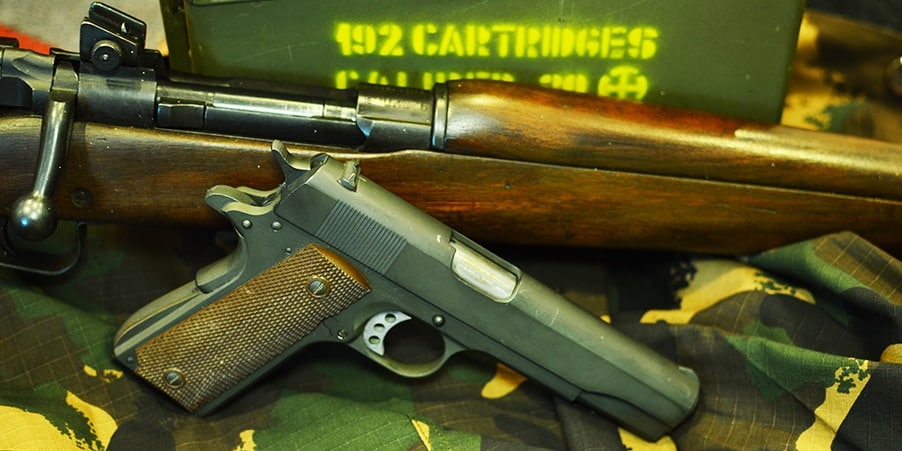 The pistol of mention, my first handgun and a total jerk. (Photo by Jim Grant)

As I strolled past a sporting good store, I noticed a sign I had never seen before: “Customers with firearms should enter directly through the gun store entrance.” Advertising a gun store openly in Mass is kind of like advertising an abortion clinic in Alabama. Regardless of your personal feelings on the subject, you know it’s a bad idea.

At that point I pulled an about face and feeling like a pervert walking past an adult store, tried to steer myself into the shop nonchalantly.

Inside I was immediately hit with the intoxicating scent of Hoppe’s 9 and cosmoline. Lee enfields, Mausers, Mosins, Krags and even the infamous AR-15 lined the walls. I was astounded. From my internet research I knew people could sell these guns in MA, but I figured they were tantamount to unicorns or $100 Colt Pythons. Sure they exist, but I would never see one in my lifetime.

Bathed in the heavenly light of fluorescent bulbs was a USGI type, Auto Ordnance 1911 pistol in glorious .45 ACP. The pistol looked like Tom Hanks had just destroyed the Panzer at the end of “Saving Private Ryan,” then handed it to me. As a young, impressionable lad with an unhealthy amount of World War II knowledge, I was practically giddy. I’m fairly certain I uncoordinatedly pointed with my whole arm, belting out: “How much!?”

“$599 and I’ll cut you a deal on a box of ammo,” the clerk replied. I could not get my liscence or wallet out fast enough, I practically threw them at the man.

“What,” I sheepishly probed, grinning to cover my dismay. I didn’t listen to his explanation as he returned my cards and began the walk of shame to shop door.

I was deemed unworthy. An outcast from this enclave of artillery and antiquity. I felt like Churchill with London burning. It was my darkest hour.

Once outside, I called my bank to tell them how much I hated them. During the course of this exchange I was informed that since I didn’t make large purchases often my per day credit limit was a mere $400.

“Let’s go the ATM. I’ll withdraw the other $200, so you can get your pistol,” my girlfriend said after a heavy sigh. 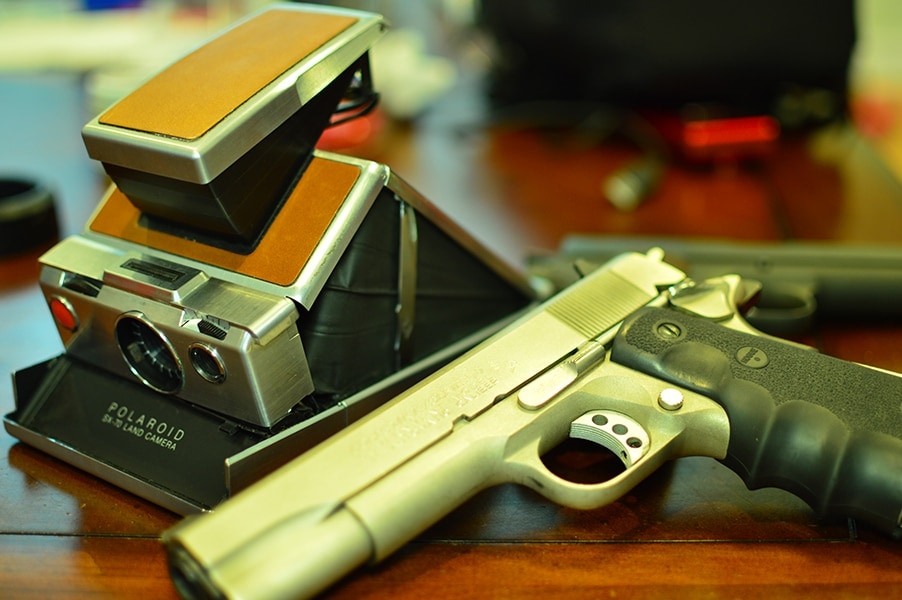 If any jaded hearts amongst you don’t believe in true love, you have never heard these words in your entire life. If I had hugged her at that very moment, the force my joy would have popped her head off like a dandylion.

With finances in order, I approached the altar of arms and after the million-question form was filled out, I was bestowed with the 1911 and a box of ammo.

The 35-minute drive home felt like 4 years. Upon arrival I stripped, cleaned and oiled the gun a dozen times. Memorising the manual of arms and marveling at the tool-less disassembly.

Since it was Sunday and the closest range I could get to was closed I had to wait until next weekend to go shooting. It wasn’t a very productive week at work. The majority of time was spent online researching and ogling 1911s.

When Saturday arrived I embarked on a pilgrimage to the American Firearms School in North Attleborough. I paid for a lane, an extra box of ammo and one spare USGI magazine.

As I approached my lane, wearing cheap rental glasses and ear-muffs, I could feel the excitement building. I loaded my magazines and placed one in the magwell of the Parkerized pistol. My hands were shaking horribly. I had never fired a handgun before in my life. I had been told the .45 ACP round was a man-stopper with the force of a Mack truck. Foes shot with the .45 didn’t just lose blood, they lost limbs. I locked my elbow, tea-cupping with my support hand, aligned the sights carefully and yanked the trigger. BOOM! The indoor range seemed to magnify the weapon’s blast.

It was terrible. I got soot in my nose, my ears were ringing, my wrists were sore and so was my face, from the enormous shit-eating grin I wore the entire time.

The 1911 is the epitome of pistol ergonomics. The angle is perfect, the trigger pull is a work of art and the reload is quick — everything about the gun is top notch. That’s why I hate it.

Can you imagine what life would be like as an adult, if every girl you dated in high school was super model? Nothing else even compares. It’s like learning to drive in a Shelby Cobra, then buying an ‘88 Corolla. The Corolla is a good, reliable car, but compared to the muscle car it’s third rate at best.

The 1911 ruined all other pistol platforms for me. If the handgun isn’t single action and made of steel, I’m just settling.