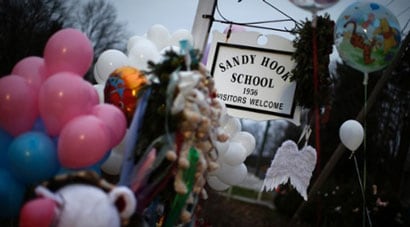 Has there really been an increase in school shootings since Sandy Hook? Opinions are divided. (Photo credit: Reuters)

A report presented by Moms Demand Action for Gun Sense in America and Mayors Against Illegal Guns was released earlier this week and reveals that a shocking 44 school shootings have occurred in the 14 months following the Newtown tragedy, resulting in 28 deaths and 37 non-fatal injuries.

Moms Demand Action along with other gun-control advocates used the report and upcoming Valentine’s Day as leverage when they made a plea to Congress yesterday to “heal their broken hearts by taking action to prevent gun violence.” The group presented heartbroken messages on handmade Valentine’s to members of Congress.

According to the analysis, 49 percent of the shootings resulted in fatalities and more than a third resulted from an argument which escalated to the most extreme form of violence. Although the ages of the shooters ranged from five to 53-years-old, 70 percent of them were minors.

Sixty-four percent occurred at K-12 schools, while 36 percent took place at a college or university. It was also determined that three-fourths of the guns used were acquired from the shooter’s home.

In addition, according to the Moms Demand Action website, not all of the instances even resulted in gunfire. Some of the “shootings” were simply instances of a gun being brandished on school property. However, the analysis did not make that distinction within the list of occurrences. The website also states that their list is likely an undercount of actual gun-related occurrences in schools across the country.

However, although the incidents all had two things in common – they involved guns and occurred on school property – the events all had unique details, ranging from cold-blooded killings, to suicides and accidental discharges with no ill intent.

In one such case, a 5-year-old boy carried a loaded handgun in his backpack to a Memphis school. The firearm accidentally discharged, but no one was injured. And although the incident caused quite a scare with parents, the bigger issue locally was the fact that it took three calls and nearly an hour for police to respond to a report of a gun in the school.

At a football game in Sardis, Mississippi a 15-year-old was fatally shot during a fight between two groups of boys. “It’s just Como and Sardis. They always be at the games. It’s just gangs and drama,” the victim’s cousin told reporters.

In another instance, a 17-year-old boy in Cincinnati was sitting at his computer desk one morning and with about two dozen students present and simply pulled out a .45-caliber handgun and shot himself in the head. The gun was acquired from his home, where it was normally stored securely in a safe.

Shannon Watts, founder of Moms Demand Action, stated that minors with access to guns in the home are a big issue. “We have to insist on parents being held liable when their child gains access to a gun. That is not an ‘accident’; it is criminal negligence, and families must be held accountable,” she said.

“We are a developed country, and we have to ask ourselves what is wrong with our culture and laws that’s creating an environment where not only do we have 44 school shootings in the past 14 months – but we are doing nothing about it,” Watts also stated.

However, gun-rights advocate and author of the book “More Guns, Less Crime,” John Lott told Guns.com that, citing data from the National School Safety Center, despite increased media attention, “that there is no general upward trend” in school shootings. Lott also pointed out that many of these cases tend to involve gang activity, as shown in the example above.

Despite what seems to be an increase in school shootings, they have actual been on a somewhat steady decline over the past two decades. (Photo credit: National School Safety Center)

James Alan Fox, Lipman Family Professor of Criminology and Law & Public Policy at Northeastern University, agrees with Lott’s opinion that these shootings are not actually on the rise.

“Without minimizing the pain and suffering of the victims, their families, and the impacted communities, these numbers are not out-of-line with historical patterns, and lower than two decades ago when gang violence was especially problematic at school settings,” Fox told Guns.com in an email.

He also added that with 50 million school children in the country, the chances of becoming a fatality are only about 1 in 2-million, and statistically speaking, “children are far more at risk outside of school than at school.”

“Most attempts to fortify school for fear of an active shooter create more problems by disrupting what should be a care-free climate for learning. We should strive not to send the message to children that they have a bulls-eye on their backs,” Fox concluded.

UPDATE: Moms Demand Action reached out to Guns.com in an effort to clarify the methodology used in their analysis. It turns out that instances in which a firearm was simply brandished and not discharged were not included in the data and that information was incorrectly stated on the Moms website. The group has since edited that discrepancy.

In addition, Erika Soto Lamb, communications director for Mayors Against Illegal Guns, also wanted to respond to experts stating that they are “making more of an issue of school shootings than we should.”

“If we wanted to have big numbers we could have adopted less conservative criteria — like brandishing a gun, which would have led to a much bigger number of incidents,” she said in an email to Guns.com. “Our aim has not been to shock with a big number, it has been to show that school shootings are a real crisis in America — 44 since Newtown is a big enough number — it’s 44 too many.”