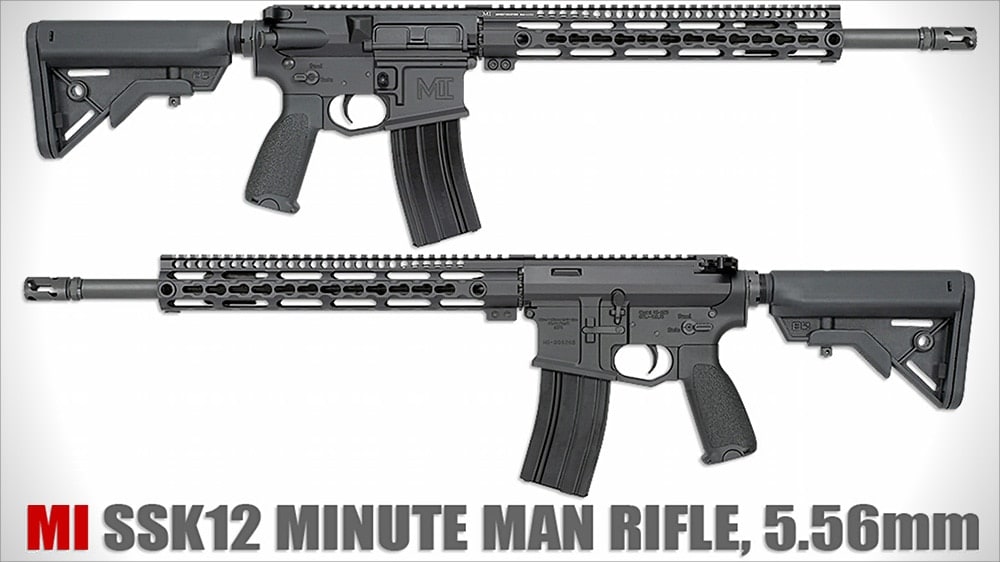 Midwest industries has been a top-flight accessory for many families of guns, mostly AR-15 and AK-47 rifles. Recently they started offering striped receivers and now the company is offering complete rifes.

They’re really going out with their first AR-15, the SSK12 Minuteman. One hell of a modern musket, this carbine keeps stacking premium kit on top of premium kit.

Starting on a matched pair of machined billed receivers, Midwest Industries has selected an FNH-USA-manufactured 16-inch mid-length, hammer-forged and chrome-lined medium contour 5.56 NATO barrel. The barrel is fit with a Midwest Industries low-profile gas block underneath their in-house SSK extended 12-inch free-floating KeyMod handguard. The Minuteman barrel terminates with a compensating flash hider and has a one-in-seven twist.

Both the upper and lower receivers are overbuilt, like the majority of milled receivers. The upper has thicker walls all around while the lower receiver sports a reinforced buffer tower. Both are machined from billet 6061 aircraft aluminum. But thanks to careful component and furniture selection the complete rifle weighs just seven pounds. 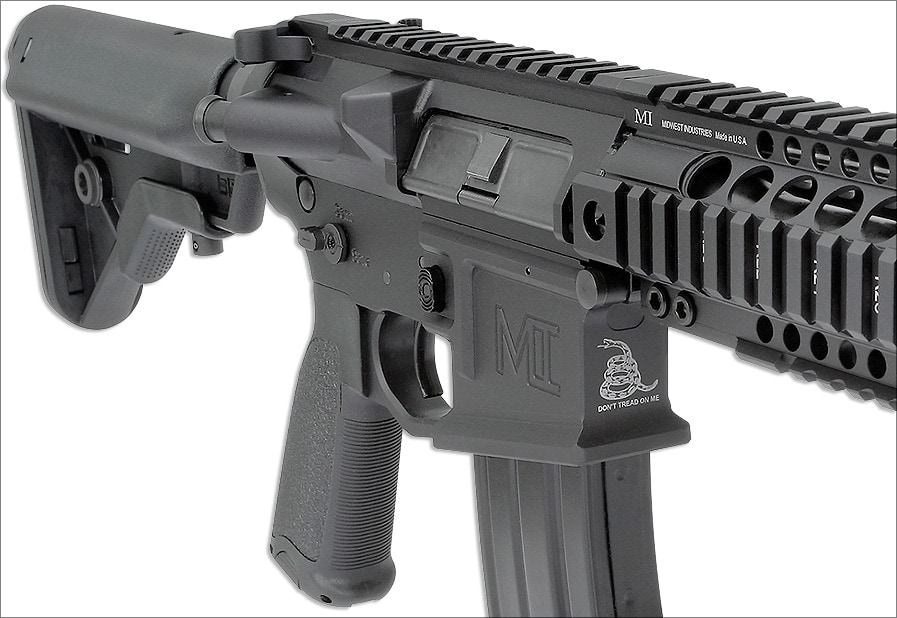 The upper receiver and the handguard are laser-engraved with a complete set of T-marks to help users with optics and other accessories that need to be sighted in. The lightweight handguard has an outer diameter of just 1.5 inches, not counting the raised rail. The handguard has a Picatinny rail on top and KeyMod slots at the three-, six- and nine-o’clock positions. In addition the SSK handguard has been de-horned to provide a comfortable shooting grip even without grip panels or gloves. Midwest Industries wraps thing up with a Bravo Company Manufacturing (BCM) Gunfighter charging handle.

Inside the upper is an in-house bolt carrier group constructed of Carpenter 158 steel, but the fun doesn’t stop with the upper alone. The lower receiver has an enlarged, flared magwell that is wire-EDM cut for precision and improved reload speeds and is fit with a full compliment of top-shelf accessories as well.

The lower also uses BCM parts, namely a Gunfighter pistol grip. These grips have a more aggressive, vertical angle that is designed to be more comfortable to shoot with the stock collapsed. This allows the overall length of the rifle to stay down and keep the weight close to the user’s shoulder, making it more maneuverable. The grip also has a water-resistant compartment for batteries or a small bottle of lube. Rounding out the furniture is a B5 Systems SOPMOD Bravo stock and short-throw 45-degree BAD ASS safety selector.

It is marked multi-cal and has a low shelf for compatibility with a wide array of fire control groups. The lower is also laser-etched with a Gadsden snake, and below it the famous quote, “Don’t tread on me.”

For a rifle in its class it’s surprisingly competitive with an MSRP of $1,499. This includes one section of KeyMod Picatinny rail for adding MIL-STD-1913 accessories, like a grip or bipod, to the handguard. Short and long rails can be purchased from Midwest Industries for about $20. It’s an optics-ready rifle meaning it doesn’t include sights, leaving that choice up to the user.

If you want to see all the details and specifications head over to the product page. If you’re more interested in putting that great-looking, 8.5-ounce 12-inch handguard on your rifle, head over to the SSK-KeyMod handguard section of the Midwest Industries website. They’re available in 10.5-, 12- and 15-inch variants starting at $175.