Over the past 15 years of data collected by the FBI’s NICS background check system just over a million applicants out of 183 million checks were denied to buy a firearm, almost all for one of 12 reasons.

In November 1998, the FBI’s National Instant Criminal Background Check System, or NICS system went live and began the congressionally mandated process of clearing each potential gun buyer who went through an FFL holder. The center is located at the FBI’s Criminal Justice Information Services Division in Clarksburg, West Virginia, and is open 17-hours a day to issue either a ‘proceed,’ ‘cancel,’ ‘delay,’ or ‘deny,’ order when FFL holders call in to vet a gun buyer or transferee.

The first full year of the NICS operations some 9.1 million checks were performed. Last year, 2013, was the highest on record with just over 21 million checks done. In all NICS has looked into the background of a potential buyer 183,228,330 times in the past 182 months, which is an average of about 33,500 checks every day. 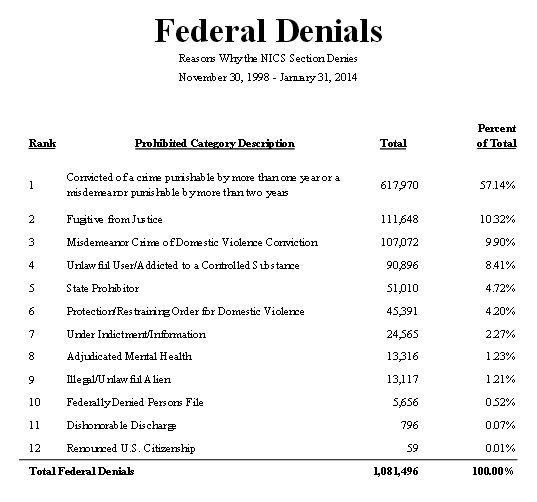 Since 1998, there have been just over 1-million denials under the NICS program, or about 0.59 percent of those who have applied. (Photo credit: FBI)

Then comes a near three-way tie for second place for fugitives from justice, misdemeanor crime of domestic violence convictions, or those who answer ‘yes’ to the question of unlawful user of a controlled substance. Each of these amounted to about 100,000 individuals or roughly 10 percent of the total. 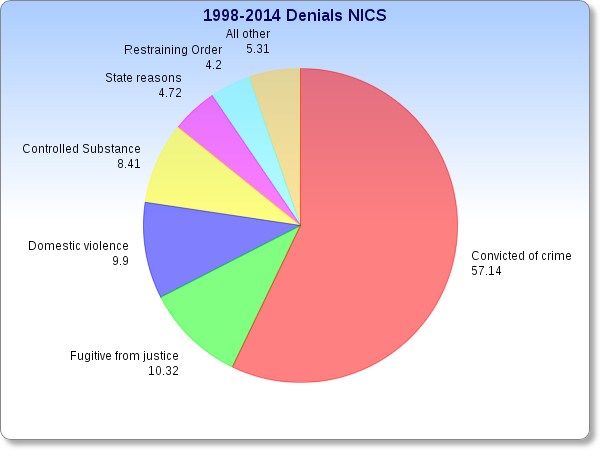 The Reasons for these denials are accounted for in one of 12 reasons ranging from renounced citizenship to fugitives from justice with those convicted of crimes with 1-2 year minimum sentences being the most common.

This last category is drawing increasing attention as those who legally use marijuana under state laws are forced to answer ‘yes’ to this category under federal law or face future charges for making false statements.

False statements made on BATFE form 4473  , commonly called ‘the yellow form’ even when its not, can lead to federal charges.

The last figure is not as uncommon as you would think. Last year alone some 2,999 Americans renounced their citizenship.

Of course, the NICS check system is not all-inclusive as a person can have multiple denials over multiple years while former denials could later get a ‘proceed’ order if documentation is provided to clear up incorrect information. In fact, the NICS program has an entire divison that handles appealing denials.

However, figures for the number of denials that are successfully appealed are currently unavailable.