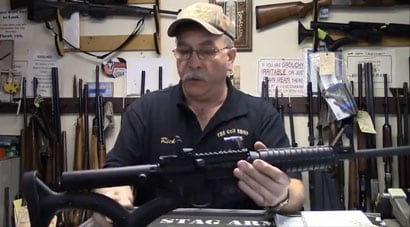 After lawmakers passed the New York SAFE Act last year, which banned the sale and possession of “assault weapons,” gun makers have done anything but take the decision sitting down, with some manufacturers finding creative ways to skirt around the infamous law.

The legislation defines an assault rifle as a semi-automatic rifle that accepts a magazine and has at least one part from the list of 10 banned features or “military characteristics,” which are essentially just cosmetic features, such as pistol grips and telescopic stocks — cosmetic features that make the gun easier to use.

But as Fox News reported this week, manufacturers, such as Stag Arms, are simply making modifications to ensure their rifles are New York compliant, leaving gun dealers in the state – as well as consumers – happy to be selling AR-15s again.

“Believe it or not, if I had a hundred of these things to sell, they’d already be gone. I’m hoping to have them in my shop in the next two weeks,” Justin Reickart, who runs H&H Guns in southwestern New York, told Fox News.

“We’ve already showed it to about a dozen people, just a picture of what it’s going to be, and the younger generation – they already love it. They’re like, it’s the same gun, just with a sci-fi looking stock. The suggested retail price is going to be $1,050. Prior to the ban, you would have been able to buy the gun for $949 – so it adds $100, to make it New York compliant.”

Reickart actually designed what he believed to be a New York compliant AR-15 last year, but couldn’t sell it when the State Attorney General refused to give him written confirmation that it was, in fact, compliant with the law.

“It’s a universal gun that you can put in anybody’s hands… I’ve used it for coyote hunting, deer hunting… it’s a fun and enjoyable gun to shoot,” Reickart added.

In fact, the AR-15 is one of the most popular semi-automatic rifles in the country and fans of the firearm claim that the use of the term “assault weapon” has been unjustly used to describe the rifle, which is essentially no more dangerous than any other semi-automatic hunting rifle.

One common misconception is that the “AR” in AR-15 stands for “assault rifle,” when in fact “AR” actually stands for “ArmaLite Rifle,” paying homage to the company – ArmaLite – which was responsible for the original patent of the lightweight design.

Steve Byron, President of S&B Products, which offers a New York compliant spur in place of a pistol grip, stated that the insignificance of the cosmetic modifications shows that the law is not productive.

“I believe politicians should not write and pass laws about something they know nothing about,” Byron added.